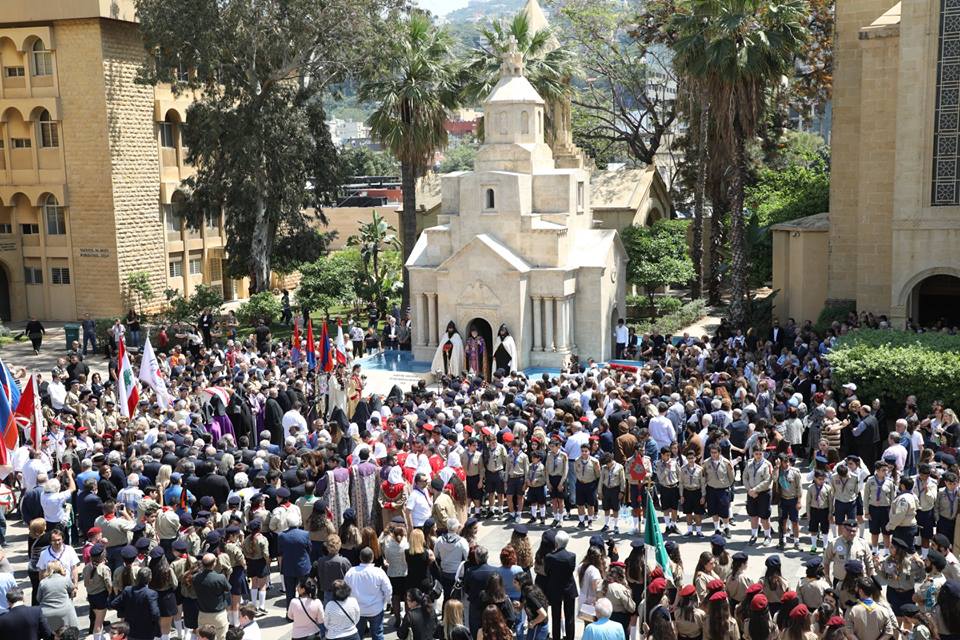 HIS HOLINESS ARAM I

24 April is the day that Armenians all over the world commemorate the Genocide and demand that their stolen rights be restored. The 24th of April is the day to honour the life and legacy of the one-and-a-half million martyrs. The goal of the Genocide was to annihilate the entire nation; but Armenians both at home and in the diaspora have risen from the ashes of those horrors. Today Armenia is a member of the community of nations and Armenians throughout the world have made important contributions to humankind’s progress and civilization even as they have maintained their distinctive identity against overwhelming odds. As Matthew wrote, “fear not them which kill the body, but are not able to kill the soul” (Matthew 10:28).  We have suffered, but we have not lost our soul.

As Turkey continues to rewrite its history of the politics of denial, the truth of the Genocide has been affirmed by governments and scholars and people of goodwill throughout the world. Even courageous intellectuals and leaders of civil society in Turkey have recognized this tragic chapter in history. I want to thank all those that have stood for truth and justice, those that have recognized the Genocide despite political challenges posed by those that still deny the crimes of the past. As I stand in front of the Martyr’s Chapel where the remains of some of our martyrs are buried, I call upon Turkey to take responsibility for the crimes against humanity committed by its predecessors. Turkey is today a member of the community of nations.  It has ratified human rights treaties, and pledged allegiance to the United Nations Charter and international law.  It must uphold these fundamental principles and end its policy of hatred and deception that even to this day portrays Armenians as perpetrators rather than victims. Turkey must recognize that there once was a nation in those lands that is no longer there; a nation that was destroyed through extreme violence.  It is a testament to the resilience of the human spirit that despite the efforts of those that killed and destroyed and denied the past, the imprint of the Armenian nation has not been erased.  The remnants of the Armenians includes a small community, but also many hidden Armenians who out of fear had to conceal their identity, but who today long to be reconnected to the nation to which they belong.  And it includes the many Spiritual and cultural treasures that were torn away from us: thousands of churches, monasteries and properties attached to the Church and the nation. Beyond recognition, we demand reparation, a return of this spiritual and cultural heritage, so that we can reclaim what is ours, and bring back to life our presence on these ancient lands.

As a first step towards achieving this vision, on the centenary of the Genocide in 2015, after carefully studying the historical rights of the Catholicosate of Cilicia to its religious properties, we asked the Turkish Constitutional Court (TCC) to return the Cathedral and Monastery of St. Sophia in Sis, now the city of Kozan. The Court refused to even consider the case, finding instead a technical excuse to send it to the lower courts in Turkey. Fully aware that the remedies in Turkey would be ineffective, we took the case to the European Court of Human Rights (ECHR).  But with the flood of cases against Turkey following the attempted military coup in 2016, and the sensitivity surrounding the Armenian Genocide, the European Court also failed to consider the case, saying that it should first go before the lower Turkish courts. Thus, to this date, the merits of our case has not been considered, and we are confronted with technical procedural obstacles. Nevertheless, we will continue to pursue our demand.  We will never surrender our rightful claim to the Church’s historical properties which is the spiritual and cultural heritage of all Armenians.

At the time of the Genocide, the Catholicosate of Cilicia was by the side of its people and witnessed with them the Ottoman atrocities. Since then, through the strong faith and commitment of the Catholicoi and the determination of the survivors, the Armenian nation has risen again, and, today, the Catholicosate of Cilicia is playing a pivotal role in demanding justice, recognition, and reparations.  The bond between the Church and the people will never break.  Our spiritual and cultural identity, our soul, will never be extinguished.

Let us listen to the voice of our martyrs telling us:

Remain strong in your faith,

Remain strong in your Armenian identity,

Remain committed to your struggle for justice and human rights.