THE ONLY PERMANENT SOLUTION TO THE ARTSAKH ISSUE IS THE INTERNATIONAL RECOGNITION OF THE REPUBLIC OF ARTSAKH" ARAM A. CATHOLICOS 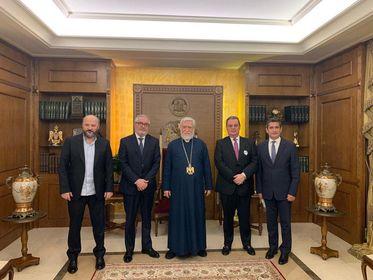 On Wednesday, October 28th, 2020, His Holiness Catholicos Aram I received a delegation from the Lebanese Forces (LF) party composed of members of the Lebanese Parliament and former ministers.

The aim of the visit was to express the solidarity of the LF party and its leader Samir Geagea to the Armenian people in the Artsakh war against Azerbeijan and Turkey.

His Holiness explained in details the history of Artsakh, stressing that Artsakh has always been an integral part of historical Armenia and never an Azerbaijani land. Artsakh has always been an autonomous territory, he said, adding that the only permanent solution to end the war is for the international community to recognize the Republic of Artsakh. Aram I also stated that Turkey plays a negative role in the war on military and political spheres by supporting Azerbaijan and using the latter to establish his presence in the Caucasus region.