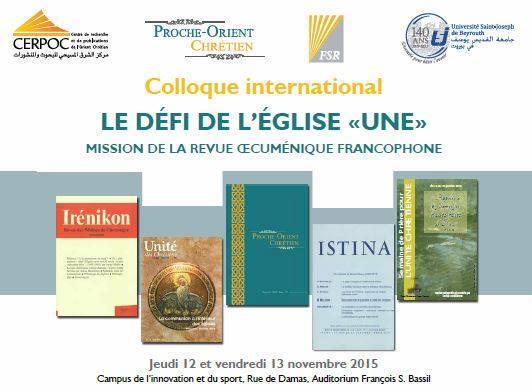 12-13 November, 2015. Rev Housig Mardirossian the Ecumenical Officer and Dr. Jean Salmanian, Member of the Ecumenical Committee represented the Catholicosate of Cilicia at the conference organized by the Faculty of Theology of St Joseph University in Beirut, in cooperation with the journal Proche-Orient Chrétien and the publishing House Centre de Recherche et de Publications de l’Orient Chrétien.

The speakers were the editors of four academic journal specialized on Ecumenism and Eastern Churches, Irénikon, ISTINA, Proche-Orient Chrétien and Revue Unité des Chrétien. The four speakers first introduced their journals and then highlighted the important issues the journals had covered, their contributions to mutual understanding and current difficulties. Although were Catholic journals, they all agreed that they had greatly contributed to building awareness of the Eastern churches, and jointly strengthened the ecumenical movement.