JERUSALEM: A CITY OF SHARED SOVEREIGNTY, A CITY OF MONOTHEISTIC RELIGIONS 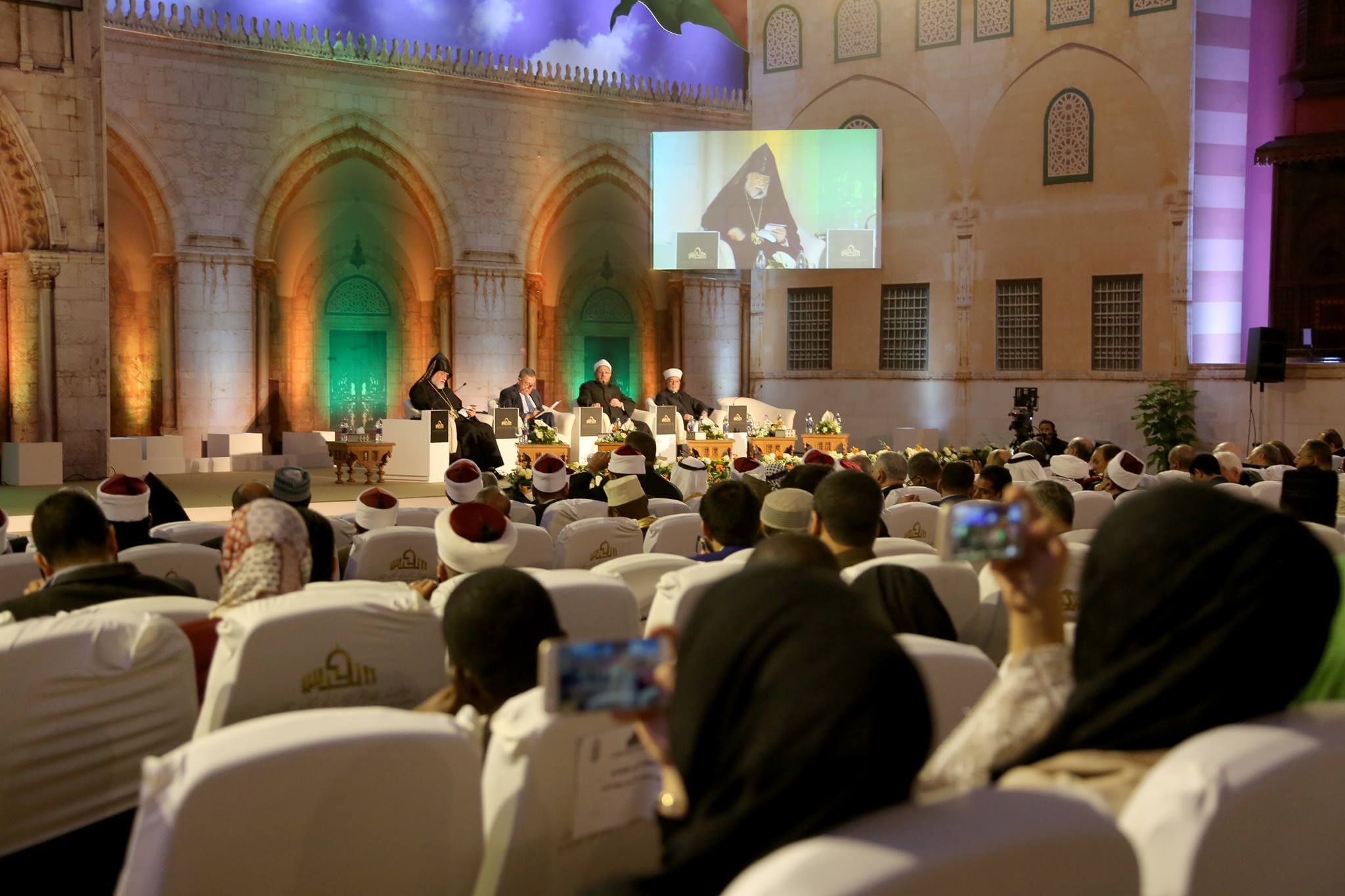 This is the text of the intervention of His Holiness Aram I on the first day of the International Conference in Support of Jerusalem, organized by Al-Azhar, Cairo, Egypt (17-18 January 2018). More than 300 high ranking religious, political and state dignitaries attended the conference.

As a holy city for Jews, Christians, and Muslims, Jerusalem occupies a special place in the history of the monotheistic religions. Whether Jewish, Christian or Muslim, when we think of Jerusalem, we are reminded of our shared beliefs, values and moral principles, which arise from Abraham’s Covenant with God. God’s justice and mercy are the foundations of our shared spiritual values; our challenge is to build political and social bonds and not to break them down. The unique nature of Jerusalem endows it with the prophetic vocation of promoting peace with justice and reconciliation among people. However, Jerusalem has become a source of conflict, generating intense emotions among Palestinians and Israelis. The future status of Jerusalem is an inseparable and integral part of the peace process.

It is vitally important to take into consideration the following factors, perspectives and concerns:

1) The Israeli occupation of the city and its policy to change the status of Jerusalem has caused demographic changes in Jerusalem, significantly reducing the Christian and Muslim presence there. The occupation has placed the peace process in jeopardy and it threatens established relationships, rights and obligations. The unilateral actions of Israel contradict the  United Nations resolutions. Legitimization of occupation is against the international law.

2) Exclusivist claims and unilateral decisions have deepened the scope of the conflict. The recent announcement by the United States president, recognizing Jerusalem as the capital of Israel, may cause the Israeli-Palestinian conflict to escalate with far-reaching consequences. In fact, biased approaches and provocative declarations do not lead to reasonable and feasible solutions and mutually acceptable agreements. In order to establish a sustainable peace, the historical and religious rights and obligations of all the involved parties and religions must be recognized and respected.

3) Any agreement within the framework of the peace process that excludes Jerusalem will not be supported either by the Palestinians or the Israelis. To facilitate the peace process, the question of Jerusalem must be depoliticized. Jerusalem should be declared "the capital" of the three monotheistic religions, a city open to all believers and pilgrims. In a unified Jerusalem the holy sites should not become mere monuments but expressions of living, witnessing and worshiping communities.

4) Jerusalem symbolizes the peaceful co-existence of the three monotheistic religions. For centuries they have lived together, accepting and respecting each other. The special legislation regulating the rights and obligations of the three religions guaranteed by international treaties and the League of Nations and known as the status quo of the Holy Places must be safeguarded. In spite of continuing sensitivities, tensions and estrangement caused by political factors, the children of Abraham are called to give a renewed expression to living together peacefully within a "special statute for Jerusalem." The rights of its communities, including access to holy places and freedom of worship, must be guaranteed by the international community. These rights and obligations can only be guaranteed in a united Jerusalem of both the states of Israel and Palestine, either with shared or divided sovereignty.

5) Jerusalem has a profound significance for Christianity. Besides being the city of the prophets, it is where Christ died and was resurrected, the first Christian church was created and the heavenly light spread to the world. The churches in Jerusalem, which have been present for centuries, are the custodians of the holy places and their presence is deeply rooted in the history of Jerusalem . The holy sites must be protected and the legitimate rights of Judaism, Christianity and Islam must be protected by any final agreement on the future of Jerusalem.

6) As a former Moderator of the World Council of Churches, I would like to remind you that the question of Jerusalem has been a priority on the agenda of the Council since its inception in 1948. As the General Secretary of the World Council of Churches has stated, the policy of the WCC on Jerusalem follows that of the United Nations. The WCC has repeatedly  called for "an open and inclusive Jerusalem, a city of shared sovereignty and citizenship, a city of two peoples and three faiths, of Christians, Muslims and Jews" (31 March 2005).

7) As Armenian Catholicos of Cilicia, I want to inform you that since 638, an Armenian bishopric has been present in Jerusalem and in 1311 the Armenian bishop was given the title of Patriarch of Jerusalem  by the Sultan of Egypt.  Since then 97 patriarchs have served our church in Jerusalem. The Armenian Church possesses several monasteries and religious sites. On several occasions, the Armenian patriarchs have joined the common voice and efforts of other church leaders of Jerusalem to call for their rights to be protected and to work for peace with justice.

Judaism, Christianity and Islam are urged to  challenge all exclusivist visions, absolutist claims, and unilateral actions in respect to Jerusalem and to emphasize its religious nature and universal character. The monotheistic religions should work together with the international community for the realization of a vision for Jerusalem that ensures the rights and obligations of the three religions, deepens their peaceful and harmonious co-existence and collaboration, and provides free access to pilgrims and visitors as a unified and open city. Jerusalem should become a model city, binding the people and radiating God's justice and mercy in the world. Jerusalem should become a city of shared sovereinty and a city of monotheistic religions.

In conclusion, peace is a God given reality. It cannot be established by force; it cannot be purchased by financial resources; it cannot be determined so called by geopolitical interests. Real, comprehensive and lasting peace is achieved only by justice, by mutual acceptance and respect.