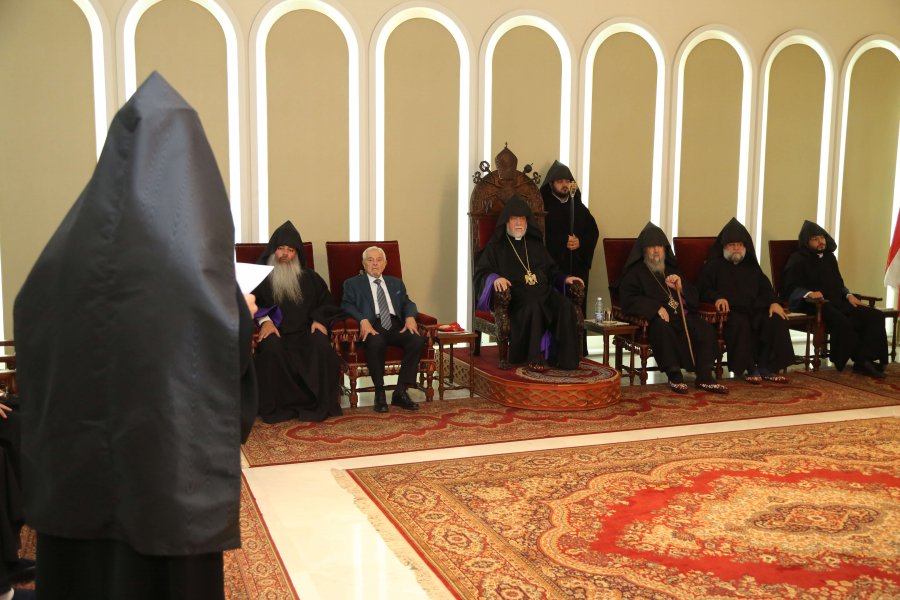 On Sunday, October 15, 2017, His Holiness Aram I presided over the Holy Liturgy in the Catholicosate of the Holy See of Cilicia. The Holy Liturgy was celebrated by the Dean of the Armenian Theological Seminary Very Rev. Boghos Tinkjian and was dedicated to the feast of Holy Translators.

Following the Divine Liturgy, the 88th opening of the school year of the Armenian Theological Seminary took place in the main hall of the Apartment of the Catholicos. Present in the opening were also priests, teachers, donors, parents and believers.

The ceremony was initiated with the Seminary anthem performed by the “Armash” choir of the Seminary, which is lead by the vice dean Monk Zaven Najarian. Following that, V. Rev. Tinkjian made the opening speech, stating Seminary has and will function with the imperative of renewal.

Concluding the ceremony, His Holiness Aram I gave his pontifical speech. Congratulating the students on the beginning of the school year and also marking the feast of Holy Translators, he conveyed three messages from our Holy Translators that are still true today. The first message touched upon Armenian language being a priority to Armenians, regardless that fact that being multilingual is of importance. In the second message the Catholicosate stressed that our forefathers, by translating the holy manuscripts into Armenian, transformed the communication language between God and Armenian people into our mother tongue, thus rendering faith and religion a daily presence in our nation’s lives, and in his third message His Holiness commanded that only Armenian schools would educate an Armenian child with Armenian spirit.

The ceremony was concluded with His Holiness’ blessing and “Cilicia” anthem.