How I See the Future of Christianity in the Middle East 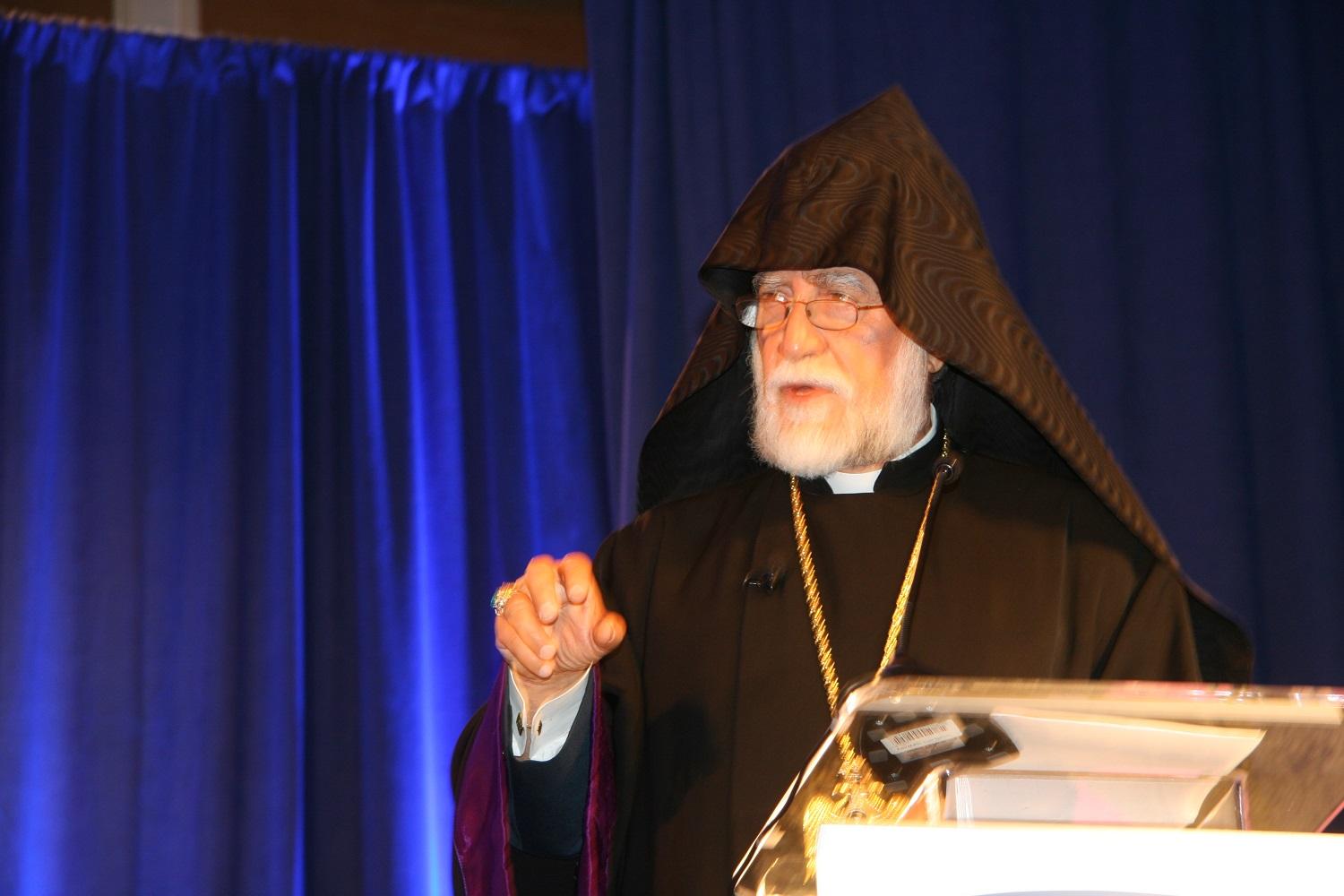 Christianity is on the verge of disappearing from the Middle East, where, for centuries, it has existed in harmony with Judaism and Islam. As the Arab Spring has morphed into a desolate Arab winter, that harmony has given way to extremism and sectarianism, producing a series of crises that have impacted all aspects and spheres of people’s lives in the region. Only drastic action has any chance of preventing the further polarization and disintegration of societies with far-reaching consequences. The world must not remain silent when communities are subjected to massacre and extermination.

Extremism has reached its most violent expression in the Middle East where fanatics are exploiting religious beliefs, socio-economic grievances, political apathy, and the failures of the Arab spring, all in order to fulfill their political and ideological agenda.

The concept of nation-state is being crushed by the sectarianism that has followed in the wake of the fall of autocratic regimes. This sectarianism is defined most particularly by Sunni-Shiite tension, as national identity gives way to confessional belonging. Sectarian radical movements, nurtured by poisonous ideologies, are spreading destruction and death. These movements appeal to popular religious sentiments even as they employ terror as a psychological weapon. Through their support by visible and invisible sources, the extremists have acquired sophisticated political, economic, military, and informational tools.

Religious extremism and sectarianism threaten Islam, the Middle East, and the world. Their threat to Christianity in the region is existential in that they aim to erase minorities from the Arab world and extend their oppressive rule over the whole region. The twin evils of extremism and sectarianism will have far-reaching consequences for the people in the region. If we fail to take collective and swift action to contain and stop their onslaught, the Middle East will be transformed into a haven for radicalism, fundamentalism, and other “ism”s of this sort. We must commit ourselves to a common and long-term effort. Extremism cannot be defeated by military action alone. A comprehensive and coherent short-term and long-term global strategy must include political, economic, and military action. Because extremists derive their legitimacy from religion by exploiting it, we can confront them by empowering Muslim moderates and by stopping all kinds of support to extremist groups.

In the early stages of the Arab spring, the Christians were blamed for not associating themselves fully with the opposition, which was in the process of being organized. The Christians observed the increasing influx of extremists into opposition forces and chose not to engage as communities with any side. Now that extremists have highjacked the Arab spring, the Christians find themselves in a critical situation. As Christians how can we face this dilemma? Although there are no easy answers or simple solutions, I would like to share with you briefly six perspectives which could serve as a basis for a plan of action to save Christianity in its birthplace.

It is particularly important that a secular and democratic state in the Middle East respect the role of religion in society. All segments of society must participate actively in the state-building process.

The Christians are caught between autocracy and extremism. We must advocate for a model of society that respects fundamental human rights and protects ethnic and religious diversities. Our commitment goes for a democratic, participatory and just society with inclusive governance. Indeed, democracy can become a bulwark against extremism. It may also ensure the future of Christianity in the Middle East and lead the whole region to a better future.

Democracy affirms a collective identity through the rule of law and safeguards specific identities based on religion, culture, and ethnicity. If democratization fails to integrate confessional and ethnic divisions within state institutions, it will become a failed state and will generate extremist movements, thereby destabilizing the whole region. The rejection of pluralism is rooted in intolerance, a source of hate and violence. This rejection renders Christians at best as second-class citizens and, at worst, as unwelcome communities, leaving no place for them in society.

Islam is not a religion of violence. Only a very small portion of the Muslim population associates itself with the objectives of extremists. The vast majority reject the violent exploitation of Islamic beliefs. This silent majority has the potential to transform the situation by speaking out clearly and firmly. They must be empowered to challenge all forms and expressions of the abuse of Islam. The Grand Mufti of Al-Azhar recently stated that “an extremist and bloody group such as the (ISIS) poses a danger to Islam and Muslims, tarnishing its image…” (The Daily Star, Aug. 13, 2014, p. 8). This statement is highly significant. Key Muslim leaders, centers, and organizations should raise their voices to condemn and dissociate themselves from those who kill and kidnap people and destroy religious sites in the name of religion. They should be on the front line of the battle against extremism.

In fact, for the leaders of the monotheistic religions to create a solid basis for action, they must work inclusively and commit themselves to a greater collaboration. Islam accepts Jews and Christians as “people of the book,” and considers them as legitimate communities, deserving “protection” under Islamic authority. The Qur’an appeals to Christians and Jews: “O people of the Book, let us come to a common word between us and you…” (al-Imran 3:64). Islam by its very nature and vocation is a religion of peace and justice. In all its forms and expressions, extremism is against the teaching of the Qur’an. Reshaping the Middle East is a common responsibility. Actors of civil society, particularly religions, must be partners in combating this global danger in order to build a culture of life that promotes peace with justice and a quality of life sustained by moral values and human rights.

The diaspora is a critical asset; its human, economic and political potential must be effectively channeled towards the mother churches of the Middle East. Diaspora communities can act in a number of significant ways: They can lobby their governments about the plight of Christians in the Middle East and urge those governments to express their concern and solidarity in tangible ways. They can organize awareness-building and advocacy campaigns and challenge the actors of civil society to be more sensitive and vigilant in respect to the challenges and concerns facing the Christian communities. They can financially support their church’s important projects and programs aimed at community building.

In addition, the ecumenical solidarity of the Western churches is of pivotal importance at this critical point in time of the Christian presence in the Middle East. That is not to say that we are looking for a new crusade. The West should seek to develop a credible, reliable, and effective policy towards the Middle East and a unified and concerted action to prevent attempts aimed at marginalization and even the forced migration of Christians.

6.      A comprehensive and consistent policy towards the Middle East is urgent. Although Western governments have reacted with a firm unanimity to the terror of extremists in Iraq, the reaction of the Western media and politicians to the plight of Christians has been weak. Humanitarian aid and air strikes have been forthcoming, but Christians are not looking for humanitarian aid; they are seeking humanitarian action. For the Western powers to truly help, they must act not only where and when their “vital interests” are at stake, but where and when basic human rights and values are ignored and violated. The policy of the West towards the Middle East, which seems to waver between engagement and disengagement, has failed to grasp the complexities, interconnectedness, and inner layers of regional realities. The West must shift from reactive to proactive, from crisis management to crisis prevention. In fact, crisis prevention is easier, less costly and more effective than crisis management.

Promoting democracy is the right path to embark on. Cosmetic approaches and short-term engagement may be good public relations, but they are not productive. The Western powers must develop a policy towards the Middle East which is comprehensive and consistent, contextual and holistic, which is based on an accurate assessment of the realities of the region, and which reconciles strategic interests with human rights values. Indeed, the future of the Middle East and the Christian communities will be ensured when its states and societies are built on plurality, equality, and liberty.

The churches of the Middle East are called to deepen their unity and broaden their collaboration. Christian migration is a terribly serious problem. Every conflict has brought with it a new wave of Christian migration. The recent exodus of Christians from Syria and Iraq is the largest Christian exodus in the Middle East since the Armenian Genocide. Giving in to pessimism and hopelessness is not the Christian way. We neither compromise our rights nor do we resign from our obligations and responsibilities. We are determined to remain firmly attached to our lands, which are imbued with the creative spirit of our fathers and mothers and the blood of our martyrs.