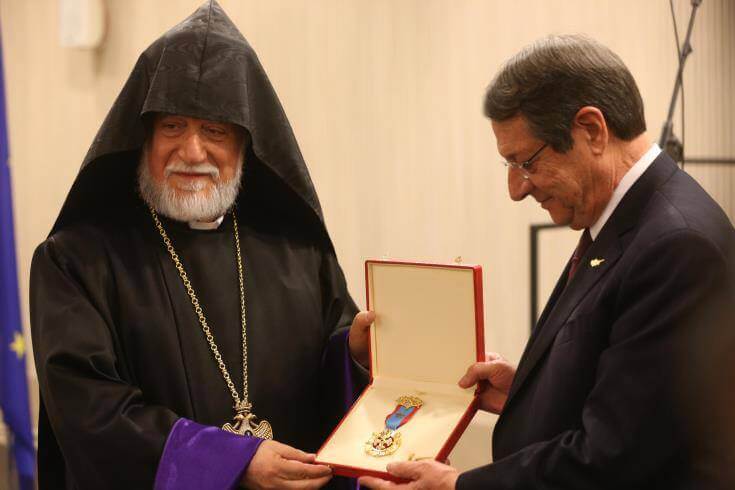 On Monday, December 11, 2017, His Holiness Aram I paid a short visit to Cyprus and participated in an Armenian cultural event, during which he decorated the Cypriot president Nicos Anastasiades with “Prince of Cilicia” Medallion. His Holiness also met with Chrysostomos II, Archbishop of Cyprus.

Receiving the medallion, President Anastasiades expressed his gratitude to His Holiness and in his speech he mentioned that Cypriot Armenians are dedicated citizens of Cyprus. Addressing the audience of around 500 guests, including the speaker, ministers, ambassadors, deputies, clergy, His Holiness talked about the role that Cyprus has played in the region throughout history. He stated that close relationship was established between Armenians and Cyprus since the Armenian Kingdom of Cilicia. His Holiness condemned the use of power to oppress people and legitimize the occupation.

Before the Armenian cultural event, organized by the prelacy, a meeting took place between His Holiness Aram I and President Anastasiades at the Presidential Palace in the presence of prelate of Cyprus Archbishop Khoren Doghramadjian, representative of the Armenians at the Cyprus Parliament Mr. Vartkes Mahdessian, community leader Mr. Hrair Sarkissian and Head of Information and Communication Department at the Catholicosate V. Rev. Bedros Manuelian. The meeting discussed issues related to Cypriot-Armenians, as well as issues concerning the Middle East. This was followed by a meeting with the Archbishop Chrysostomos II.