“WHY WOULD THE EUROPEAN COURT OF HUMAN RIGHTS SO EASILY REJECT OUR CASE, KNOWING THAT NO LAWYER WOULD DARE TO BRING SUCH A CASE BEFORE THE TURKISH COURTS?” 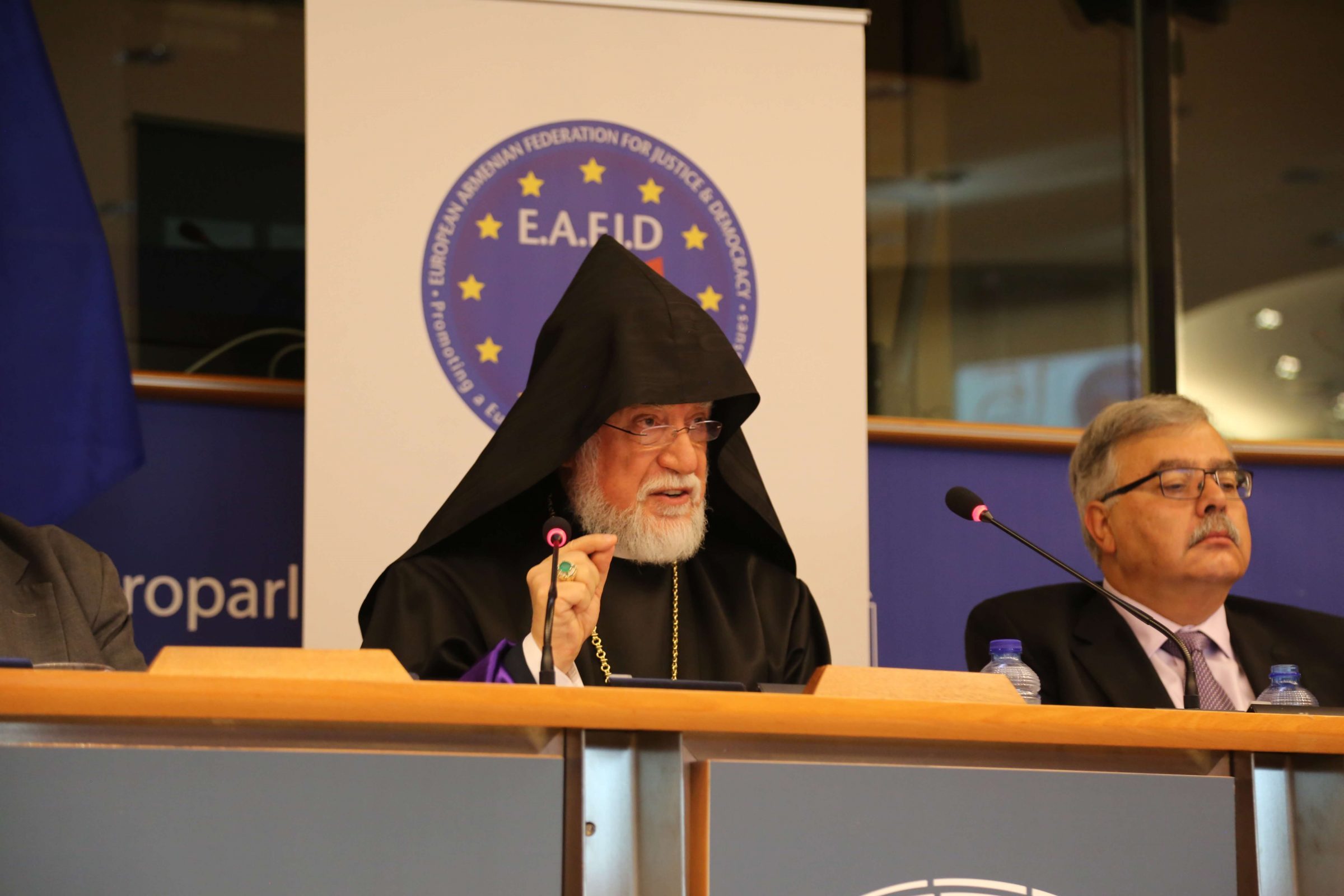 HIS HOLINESS ARAM I

Brussels. Addressing the conference on the Armenian Cause at the European Parliament in Brussels on Thursday 19 October 2017, His Holiness Aram I said, “the Armenian Genocide is no longer an exclusive concern of Armenian-Turkish relations; this well-documented fact of history, the first genocide of the 20th Century, has become a matter of historical justice on the global agenda.”

He continued: “Following President Erdogan’s 2011 overtures to religious minorities, I was convinced that the return of confiscated church properties could be the first step towards the reparation process, and, in that spirit, I wrote to the President requesting the return of the Armenian Church’s historical seat. When Mr. Erdogan did not respond, the Catholicosate of Cilicia, following the provision of international law that genocide recognition and reparations are closely connected, filed a lawsuit before the Turkish Constitutional Court on 25 April 2015, which claimed the restoration of the ownership of the Church’s centuries-old seat in Sis, present-day Kozan.”

The Catholicos informed the Conference that “following the recommendation of Turkey’s Ministry of Justice, the Constitutional Court refused to address this matter and proposed to send it to the lower courts, knowing well that we had no effective remedy because only the Constitutional Court has the jurisdiction to address constitutional challenges to the unjust property laws and regulations that deny Armenians even the right to examine deeds at the property register.”

His Holiness Aram I then said that the Catholicosate of Cilicia, being left with no option, filed an Application on 8 December 2016 before the European Court of Human Rights in Strasbourg. The Catholicos added that following this, the attempted military coup in Turkey resulted in systematic purges of the judiciary, including members of the Constitutional Court and the arrest of many lawyers and judges. Aram I stated: “We expected that in these circumstances, the European Court of Human Rights would give us justice; but it had decided that our case was inadmissible and gave no explanation of its decision. Why would the European Court of Human Rights so easily reject our case knowing that no lawyer would dare to bring such a case before the Turkish courts? How could a single judge throw out a 900-page Application, historically and legally well substantiated by some of the best international lawyers? Why was our legal team not given a chance for a hearing? Is everybody now afraid to confront Turkey’s appalling record of human rights violations? We are astonished and, in fact, deeply disappointed at this miscarriage of justice, particularly at this crucial juncture of modern history when Europe is expected, in faithfulness to its values and principles, to consider justice above geopolitical interests.”

Catholicos Aram I concluded with the following remarks: “Europe is essentially a community of values, not merely political and economic interests. Therefore I still hope that the European Court of Human Rights will reconsider the admissibility of the case on the basis of justice and human rights.” He ended by saying that “in spite of the denial of justice, the Armenian people will continue to struggle for justice.”

The conference was attended by Edourd Nalbandian, Foreign Minister of Armenia, several members of the European Parliament, local politicians, representatives of NGOs and delegations representing the Armenian Communities of Europe.