Armenians Renew Their Attachment To St Gregory The Illuminator, His Faith And His Mission 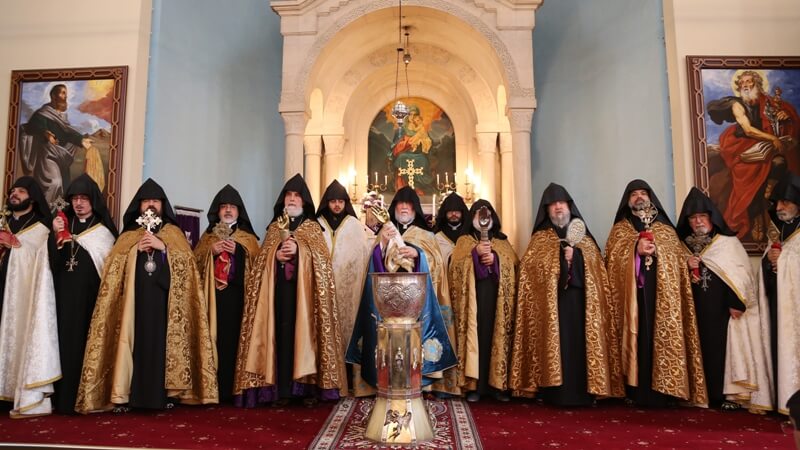 13 March 2016. On Sunday, His Holiness Aram I presided over the Holy Liturgy at the Cathedral in Antelias, concluding the one-week long pilgrimage with prayers to the right-hand relic of St Gregory the Illuminator, Patron Saint of the Armenian Church. 2016 is the 85th anniversary of the edict by Catholicos Sahak II Khabayan of Cilicia, establishing for the feast, “Day of Faith,” to honor St. Gregory the Illuminator.

His Holiness Aram I entered the Cathedral at the back of the procession, led by the seminarians, the priests and bishops, and the clergy carrying the 250-year-old silver box containing the right hand relic of the Saint. The box is a reminder to the Armenian people of the Patron Saint of the Armenian Christian faith and of the tragic route followed by their ancestors and Church during deportation from Sis to Aleppo and final settlement in Antelias.

In his sermon, Archbishop Komitas Ohanian described St Gregory as the second Illuminator of the Armenian faith and the Shepard of the Church, who continues to inspire the Catholicoi and the people.

At the end of the Holy Liturgy, Catholicos Aram I blessed the faithful with the relic as the procession walked among them. The Prime Minister of the Republic of Nagorno-Karabagh, Ara Haroutiunian, and his delegation, as well as the members of the Executive of the Church Council, were invited to join the Procession. After meeting the people and blessing them, His Holiness returned to the altar and blessed the water with the relic, while reciting his own prayer. In his prayer, Catholicos Aram I beseeched Saint Gregory, as the witness of Jesus Christ and the Apostle of the faith of the Armenian people, to intercede and bestow heavenly grace upon Armenians and lead them to a virtuous life.

At the end of the Service of Blessing the Water, the relic of the saint remained on the Altar, under the supervision of two priests, for the people to offer their supplications and prayers.