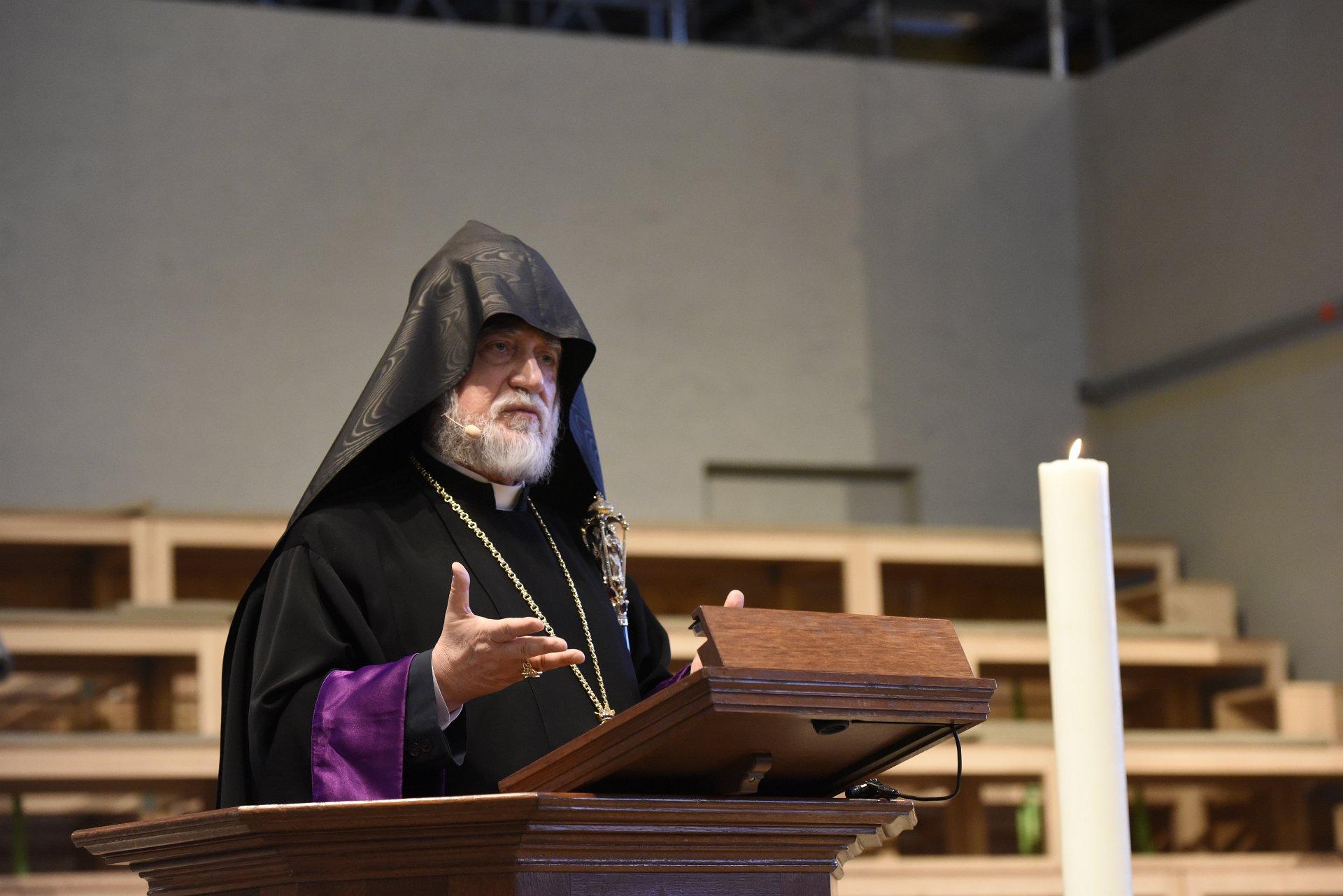 This gathering that takes place within the context of the Centennial of the Armenian Genocide has been named Switzerland-Armenia: 100 years of solidarity. As we celebrate this great event, I would like to share with you a few reflections:

1) People's faith, people's creativity, people's vision and people's power shape the identity and credibility of a country. The solidarity that was expressed by Switzerland towards the Armenian people was initiated and realized by Swiss people. Therefore, I would rephrase the theme of this gathering as 100 years of solidarity between the Swiss and Armenian peoples.

2) Indeed, solidarity is a simple yet mighty word. Solidarity means to identify yourself with the concerns, suffering and expectations of the “other.” The history of the last 100 years of our two nations clearly testifies that the Swiss people shared the suffering of our people by expressing tangibly their full and active solidarity at the most crucial juncture of our history and thereby enabled us to endure.

3) Therefore, we must celebrate the solidarity of our two nations together, first by giving thanks to our common Lord Jesus Christ who called you to serve a small nation, the first nation to have accepted Christianity and one that has remained faithful to the imperatives of Gospel values even at the cost of its blood. We, Armenians, give thanks to God that, following the genocide, with the support of the Swiss people, we found the hope and courage to reorganize and reactivate our church and community.
Solidarity is sustained and guided by basic values and principles. As a theologian, reading the history of the Swiss people’s humanitarian action in the Near and Middle East during the last hundred years, I would like to highlight the following values that empowered and motivated the people of Switzerland in their act of solidarity with the Armenian people.

a) Faith in God, which generates obedient response to the divine call, led the people of Switzerland to help the Armenian people. . The Swiss people were called to follow the teachings of Jesus Christ: to reject self-centrdness, to love the other and to respond to the need and the suffering of others.

Guided by the imperatives of the Christian faith, the Swiss people stood firmly with my suffering people. It sent missionaries, men and women, pastors and doctors, educators and civil servants, people from all walks of life with one goal: to help the Armenian people.

b) The second value, which became the driving force of the engagement of the Swiss people in solidarity with the Armenian people, was their commitment to justice. For the Swiss, people and government alike, the Armenian problem was not simply a matter of humanitarian assistance. For them it was, above all, a question of justice, and out of their outrage, they acted immediately, boldly and with a profound sense of responsibility.

In 1895, horrified by the massacre of Armenian victims, the Swiss secular and religious media in Geneva, Lausanne and Neuchâtel launched a fund-raising campaign (Karl Meyer, l’Arménie et la Suisse p.47), followed, in 1896, by a popular demonstration, organized in Lausanne. This action led to the formal organization of the Swiss programme of aid to the victims (p.49).
In 1915, these popular protests were echoed by the actions of Swiss politicians. Gustave Ador, later President of the Swiss Confederation, in the wake of the massacre of Armenians, officially protested the Turkish action to the League of Nations and, later, questioned the resettlement policies of the League towards the survivors at its 5th Assembly in 1924. One remembers with great appreciation and admiration, the five-time President of Switzerland Guiseppe Motta’s intervention at the League of Nations in September 1922, where he said, “when we think that this people had a popuation of about two-and-a-half millions, of which only 300,00 now remain in Turkey, while half a million have become exiles, supported by charity…, we cannot refuse this poor, suffering people the tribute, not only of our sympathy, but also of our determination to assist it in the fullest measure of our powers.” (League of Nations, Fourteenth Plenary Meeting, September 22nd, 1922.

c) Helping to restore human dignity, a concept that occupies a central place in religious ethics and human rights, was another factor that motivated the Swiss people.
It is highly significant that representatives of all people of Switzerland, Protestants and Catholics, Christians and non-Christians, participated in all initiatives and activities aimed at helping the Armenian people. Furthermore, assistance was given to all Armenians without any confessional discrimination. Helping Armenians was considered a God-given mission, a sacred vocation. With this vision and commitment, your sons and daughters went to Turkey, then Syria, Lebanon and Greece, and they achieved their mission often under extremely dangerous conditions.
The youth of Switzerland should be proud of what their parents and grandparents did for the Armenians. And the Armenian youth, in their turn, should remember, with a deep sense of gratitude, what the Swiss people did for their parents and grandparents at a critical period of their history. We must all respond with gratitude. We must also look forward with new vision. How can we learn from our past and transform our solidarity into partnership. Here is the challenge before us.
On this solemn occasion I would like to express, on behalf of the Armenian people, my profound gratitude to Switzerland. May God bless Switzerland. May God bless you all.

ARAM I
CATHOLICOS OF CILICIA