The Department for Ecumenical Relations

Ecumenism and inter-religious relations remain one of the main areas of mission and ministry of the Holy See Catholicosate of Cilicia. Since the fifties its clergy and lay representatives have taken an active part in global and regional ecumenical and inter-religious movement meetings and conferences.

The ecumenical engagement of the Holy See was more organized after 1962, when it became a member of the World Council of Churches. In 1975, at the Nairobi Assembly, Bishop Karekin Sarkissian (later Catholicos Karekin II) was elected a Vice-Moderator of the WCC Central and Executive Committees. In 1991, at the Canberra Assembly, Archbishop Aram Keshishian 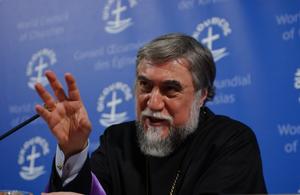 The relations of the Holy See with the Churches of the Middle East have always been fraternal. As one of the initiators of the ecumenical movement in the region, it took an active part in the foundation of the Middle East Council of Churches in 1974.

The Holy See continues with growing impetus its ecumenical relations with the Anglican Communion and the other Churches of the Reformation, as well as with various ecumenical and international organizations.

In 2002 the Ecumenical Relations Committee of the Holy See was formed with 7 ordained and lay men and women members.

In 2010 the Holy See became a member of the Christian Conference of Asia.

The Holy See participates in the meetings of the Co-ordinating Committee of the United Bible Societies and Eastern and Oriental Orthodox Churches Relations.

Armenian Church University Students Association of the Holy See is a member of Christian university and youth organizations.

On the local level, the Holy See has representatives in many committees; such as, Religious Textbooks Editorial Committee, Humanitarian Assistance Committee and Christian-Muslim Committee.

The Holy See works hard to generate tolerance and build mutual confidence between Christian and Muslim communities in the Middle East and worldwide. It initiates a number of inter-religious dialogues and takes active part in important inter-religious initiatives and conferences on regional and international levels and organizes meetings of the representatives of world religions in Antelias.

The Holy See actively participates in the ecumenical movement and inter-religious dialogue through its clergy and men, women and youth lay representatives

in the commissions and committees of ecumenical councils and inter-religious organizations.