His Holiness Aram I receives Ignatius Aphrem II, the new Syrian Orthodox Patriarch of Antioch and all the East, and his delegation 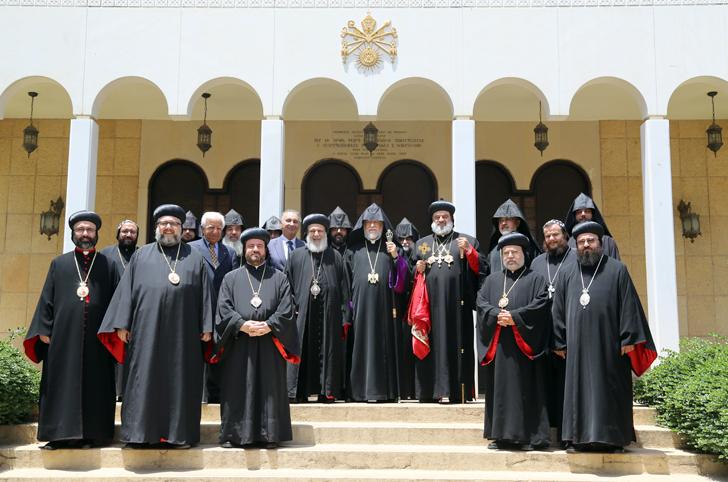 On Saturday 26 June, H.B Ignatius Aphrem II made an official visit to the Catholicosate of Cilicia and met with H.H. Catholicos Aram I.

After canonical prayers at the St. Gregory the Illuminator Cathedral, His Holiness the Patriarch and the accompanying delegation moved to the Main Hall of the Catholicosate, where Catholicos Aram I welcomed them. In his welcoming speech, the Catholicos spoke of the history and the circumstances that have bound the two churches together. He then said that the unity in faith between their churches should presently find concrete expression in the lives of their people. His Holiness also referred to ecumenism and emphasized the importance of bilateral theological dialogues between the Oriental Orthodox family of churches and other churches. He then concluded by calling for closer cooperation between the two churches in dealing with the difficult issues impacting the lives of Christians in the region.

In his response, the Patriarch thanked His Holiness for his welcoming words and recalled their ecumenical cooperation when His Holiness was the Moderator and he a member of the Executive Committee of the World Council of Churches. He then promised to continue the legacy of their predecessors and continue the strong relationship between their two churches and the Oriental Orthodox family in the Middle East.

After the formal meeting, the Patriarch and his delegation were the guests of His Holiness for lunch. Bishop Shahé Panossian, the Prelate of Lebanon, Archbishop Nareg Alemezian, the Director of Ecumenical Relations, and Dr. Bedros Karajerjian, Chairperson of the Executive Council of the Catholicosate, were also present.