“Armenians do not want sympathy or mercy from the Turkish authorities; they demand the recognition of the Genocide and Reparations,” Said His Holiness Aram I 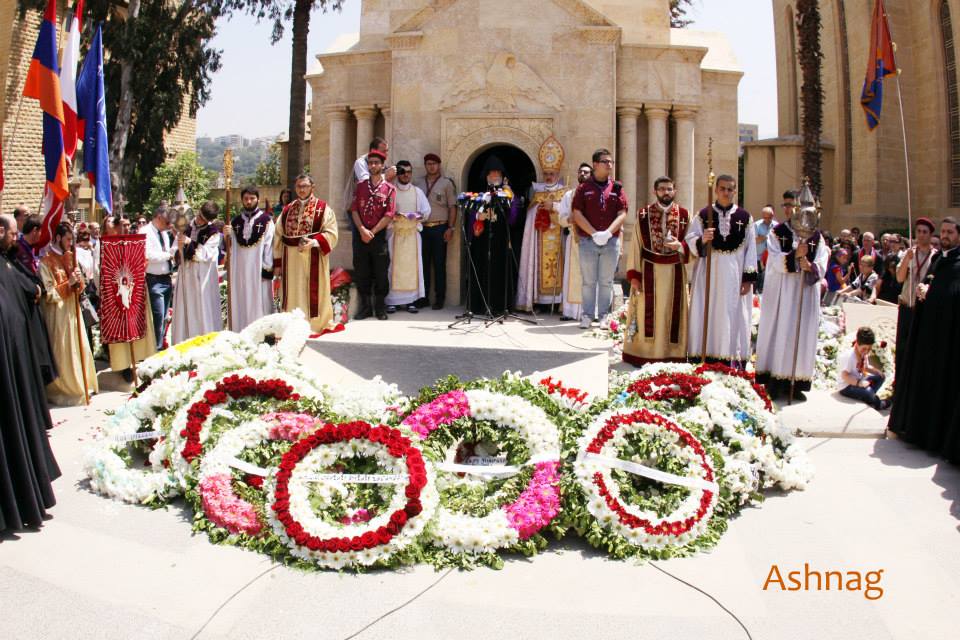 24 April 2014. On Thursday, following the Holy Liturgy at the St. Gregory the Illuminator Cathedral in Antelias, the faithful attended the requiem service in memory of the martyrs in front of the Memorial Chapel.

His Holiness Aram I presided over the service and, addressing the people, he delivered the following message:

The Armenian Genocide was planned and executed 99 years ago by the Ottoman authorities. As Armenians in the diaspora commemorate the 100th anniversary of the first Genocide of the 20th century, the international community should understand that the Genocide continues today in different forms:

-          Governments who have committed themselves to supporting all international declarations, covenants and treaties regarding human rights have cynically chosen to protect their geopolitical interests by not demanding that Turkey be held accountable for its crimes against the Armenian people.

-          The Genocide created the diaspora. Practically all parts of Article two of the Convention on the Prevention and Punishment of the Crime of Genocide apply to Turkey’s actions in 1915. The Convention stipulates the following acts as genocidal: “killing members of the group; causing serious bodily or mental harm to members of the group; deliberately inflicting on the group conditions of life calculated to bring about its physical destruction in whole or in part.” Yet certain of the 145 signatory countries, while insisting that these standards be applied in some situations, refuse to accept them in the case of Turkey. Why are they applying double standards; why?

-          The Genocide continues: Not only are Armenians deprived of their spiritual and cultural heritage in Western Armenia and Cilicia, the successors of the perpetrators are trying to eliminate all signs of that heritage that might identify its owners. Why in this case is UNESCO not honoring its goal of protecting monuments, buildings and sites?

-          The Genocide continues: Turkey has manipulated the 1922 Abandoned Properties laws in order to hold on to the properties and artifacts belonging to the Church, the community and individuals. Don’t they know that confiscating property is against human rights?

-         The Genocide continues: In order to coerce Armenia and all Armenians into negotiating on its own terms, Turkey is cooperating with Azerbaijan in imposing an economic blockade on the state of Armenia.

-          The Genocide continues: as Turkey is mobilizing its political, diplomatic and economic means to promote anti-Armenian propaganda.

-          The Genocide continues: Turkey is reviving the Ottoman expansionist policy in Syria through proxy wars. Extremists in Der Zor, Yacoubieh, Tel Abeid, Ras-ul Ain and, lately, in Kessab have forced Armenians to leave their homes and their properties. Their means of livelihood and belongings have been looted and taken to Turkey. 1915 is being repeated while the world stays silent.

-          The Genocide continues: Turkey continues to deny the Genocide and to describe Armenians as traitors and disloyal citizens.

Who will call Turkey to account at the International Court of Human Rights?

Why does the Arab World remain silent to Turkey’s expansionist policies?

Last night we read the message of the Prime Minister of Turkey to Armenians. Distortions of historical facts cannot silence truth. The happenings of 1915 were not a simple consequence of the war. They were planned and executed by Tala’at and Enver Pasha and their minions against our grandparents. We therefore reject Turkey’s condolences and demand justice, reparation and Turkey’s recognition of the Genocide.

With this determination we shall plan the 100th anniversary commemoration of the Armenian Genocide.