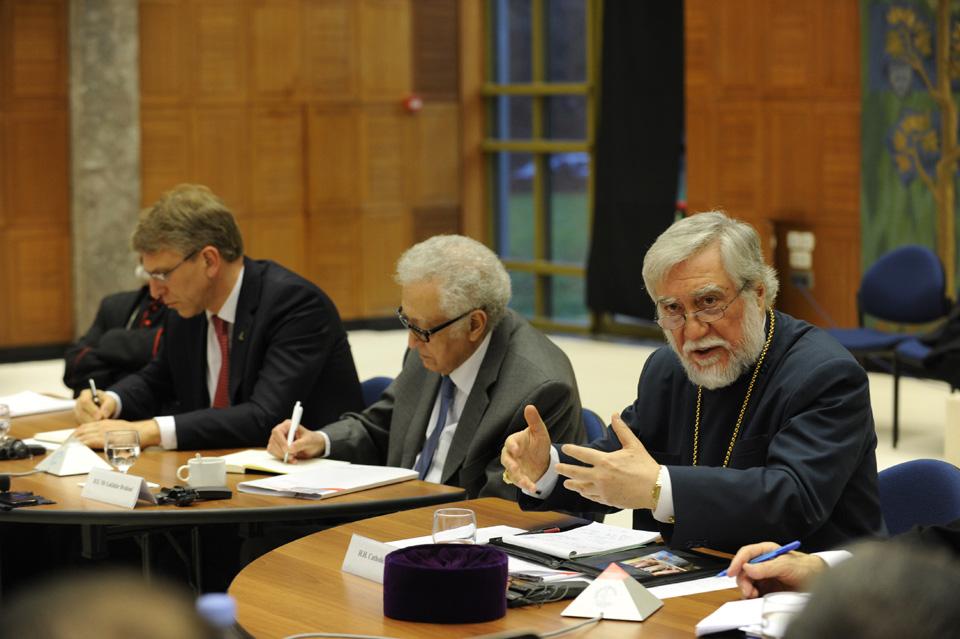 15-17 January 2014, Catholicos Aram I took part in the consultation held at the WCC in Geneva Switzerland. The participants included religious leaders from Syria and the Middle East Council of Churches, representatives from churches from countries of the Action Group for Geneva I, and other international ecumenical organizations.

The General Secretary of the WCC, Rev. Dr. Olav Fykse Tveit, welcomed the distinguished participants and explained that the purpose of the meeting was to prepare a common Christian response to be presented to the UN-Arab League Special Representative Lakhdar Brahimi when he joins the current consultation on the last day.

Religious leaders from the region discussed what they expect to come out of the UN Geneva 2 for Syria meeting on 22 January 2014 in Switzerland. His Holiness Aram I made the following nine points.

1) the UN Geneva 2 for Syria meeting on 22 January 2014 begin a transparent and credible peace-building process that responds to the legitimate expectations of the Syrian people, led by the Syrians and supported by the UN and the Arab League; 2) armed conflict/violence cease immediately; 3) the arming of all parties be stopped and prisoners and kidnapped persons be released; 4) humanitarian assistance to refugees and internally displaced population be opened; 5) a comprehensive political and social programme to rebuild the Syrian society with the involvement of all sectors of Syrian society (government, opposition and the civil society) be initiated; 6) the unity and territorial integrity of Syria be kept; 7) the pluralistic (ethnic, religious) nature of Syria be preserved and co-citizenship respected; 8) the constitution be revised to guarantee the human rights of all citizens and empower the civil society. 9) as Christians we speak with one voice, ready to work with our Muslim brothers and sisters of goodwill for peace and reconciliation, through mutual forgiveness, and building mutual trust.

The participants recommended that the points presented by His Holiness Aram I become the basis of the common statement of the consultation.

During the last session of the meeting His Holiness Aram I welcomed Mr. Brahimi and transmitted to him the expectations and hopes of the Christians in their call for action for a just peace in Syria with one voice. (See WCC story and statement: http://www.oikoumene.org/en/press-centre/news/joint-representative-for-syria-to-deliver-urgent-call-from-churches-to-geneva-2-talks