"THE ECUMENICAL MOVEMENT MUST SEEK AN INCLUSIVE AND RESPONSIVE VISION" H.H. ARAM I 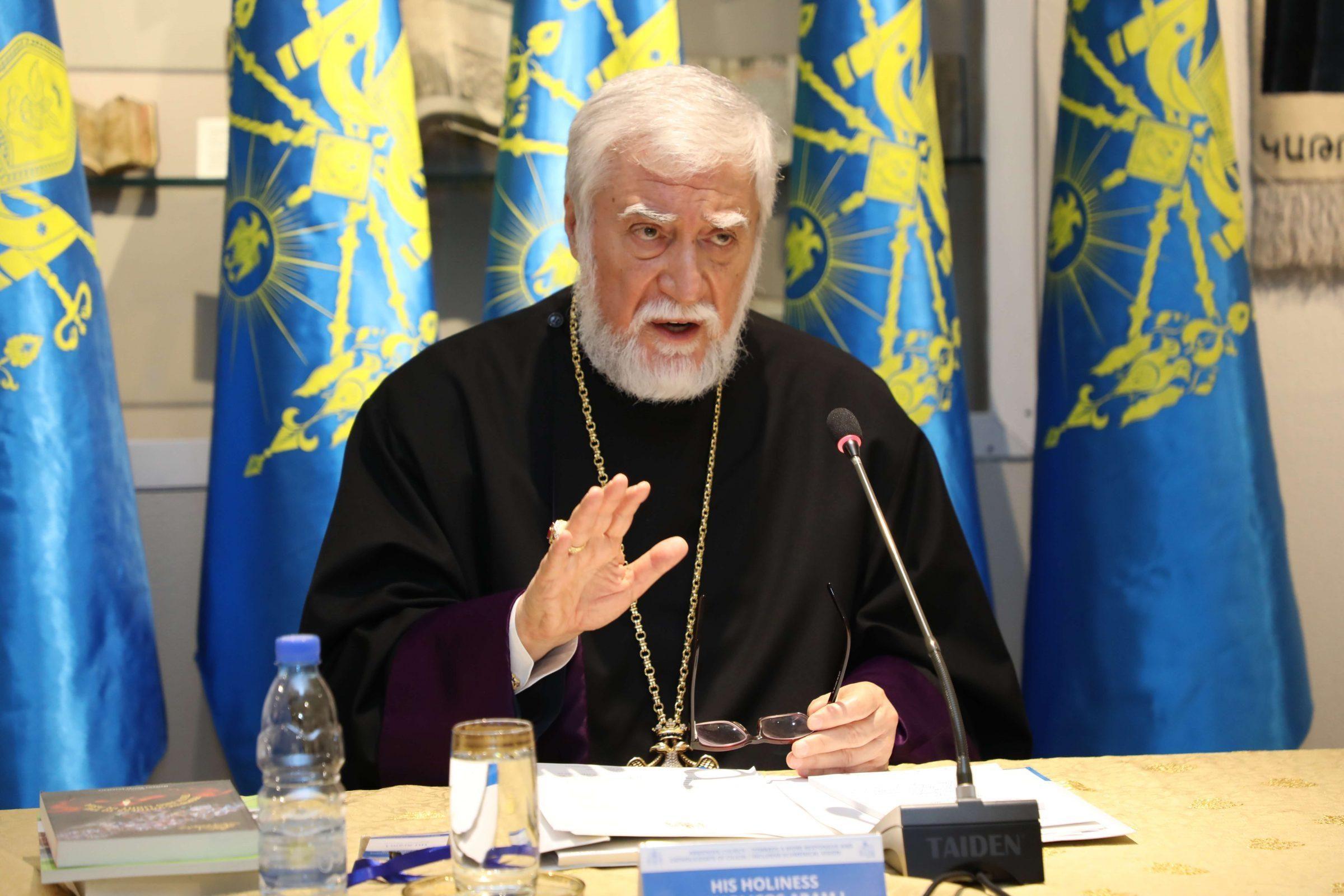 Addressing the international ecumenical consultation taking place at the Armenian Catholicosate of Cilicia, in Antelias, His Holiness Aram I said: " As a future-oriented movement, the ecumenical movement calls us to read the signs of the times and seek the right way to respond out of our Christian faith and calling and move forward. If the ecumenical movement does not open itself to wider spaces and horizons; if it does not take seriously the catastrophic consequences of climate change, the refugee crisis and similar major problems facing humanity and their implications on the life and witness of the churches, it may lose its relevance and fade away".

In his keynote address Aram I  assessed the present ecumenical landscape under four sub-headings:

1) For a church beyond its walls; 2) For an ecumenical movement beyond institutions;  3) For a creative interaction between 'movement' and 'fellowship'; 4) For an inclusive ecumenical vision.

Speaking about "being church" which His Holiness considers the heart of the ecumenical movement, he said that: "Being church is facing huge challenges. In fact, the growing de-institutionalization of the Christian faith and its practice, the emergence of dichotomies between believing and belonging, the changing concept and status of local church, new expressions of church-state relations, and the clash between conservative and liberal approaches, particularly regarding socio-ethical issues have had a profound effect on the ecclesiological and missiological self-understanding of the church. They have harmed the credibility and relevance of the institutional church and created new divisions in inter-and-intra church relations. The implications of these developments on the ecumenical movement are considerable, indeed". He considers developing "a people centered ecclesiology" of pivotal importance because it "both protects and transcends the local church, accompanies the church to liberate itself from its institutional captivity and inward-looking estate, makes the church a serving, caring and witnessing community in the daily life of the people, strengthens the churches' ecclesiological interconnectedness, preserving their legitimate diversities and deepening their essential oneness". According to His Holiness "within the context of people-centered ecclesiology, the ecumenical movement may reconcile the ecclesio-centric approach, which stresses the centrality of visible unity and the Christo-centric approach which emphasizes the missionary outreach of the church".

Referring to the present ecumenical landscape, Catholicos Aram I said that the ecumenical movement is in stagnation: "the convergence-oriented theological dialogues, after a period of intense activities and high expectations, are in decline because they have to a large degree exhausted their agenda;  their agreements have not been appropriated by the churches, and the shift of the churches' concern from dogmatic to socio-ethical issues, which have become deeply divisive, have rendered the bilateral theological dialogues nearly obsolete. Multilateral ecumenical discussions have lost their attraction, giving way to bilateral and confessional ecumenical relations and collaboration. The ecumenical structures have been paralyzed and ecumenical reflection and action have been confined within stereotypes. Excessive institutionalism has hampered the efficacy of ecumenical witness, and ecumenical councils have significantly lost their impact. In other words, membership-based, institution-oriented, and consensus-building ecumenism is on the verge of losing its importance and credibility, giving way to networking, advocacy, partnership, forum, acting together, and other non-institutional forms and expressions of both bilateral and multilateral ecumenism".

Aram I believes that "the ecumenical movement cannot move forward with old models, concepts and paradigms. It must go beyond its institutions by broadening its agenda, revising its methodologies, reshaping its culture and redefining its vision. Whatever forms and articulations the ecumenical movement may acquire, and whatever agenda priorities it may set, its oneness and wholeness, its integrity and responsiveness must be protected and enhanced".

Because for many churches the visible unity is no more the major focus of the ecumenical movement, His Holiness proposed to revive the concept of "conciliar fellowship". In his judgment "it may keep together both the movement and fellowship dimensions, does not conflict with the churches' ecclesiological self-understanding, and does not aim at consensus building. As a comprehensive model of unity, conciliar fellowship may provide a broader space and a safer framework for the churches' active participation; it may free the churches from the captivity of parochialism and confessionalism, and engage them in a process of mutual accountability and responsibility; and it may also reinvigorate the concept of pilgrimage which has gained momentum in the last decade".

According to Aram I "An exclusive ecclesiological approach to unity is at a standstill. A Trinitarian approach with a strong emphasis on pneumatology and Logos theology may challenge the churches' ecclesiological self-sufficiency. It may enable the churches and the ecumenical movement to move from church-centered to oikumene-oriented unity by locating it as a "ferment" within the wider context of unity of common humanity in a common household. This change of strategy calls the ecumenical movement to reconsider the Uppsala's vision of "unity of church-unity of mankind." Such a holistic and all-embracing vision will engage the church in creative interaction with human society and the creation at large and become a new ‘sign post’ to respond to the current social and ecological challenges".

His Holiness concluded his lecture by appealing to the churches to re-affirm their commitment to the ecumenical movement  This is a critical time for a wake-up call: If the ecumenical movement, by discerning the promises and challenges of present times, fails to develop an inclusive vision, it may eventually move towards disintegration. If the churches are seriously in search of one faith, one eucharist, and a common witness, which is God's call in Christ in the power of Holy Spirit, they should re-affirm their commitment "to stay together", but also "to grow together", "to walk and to work together", and "to move forward together".