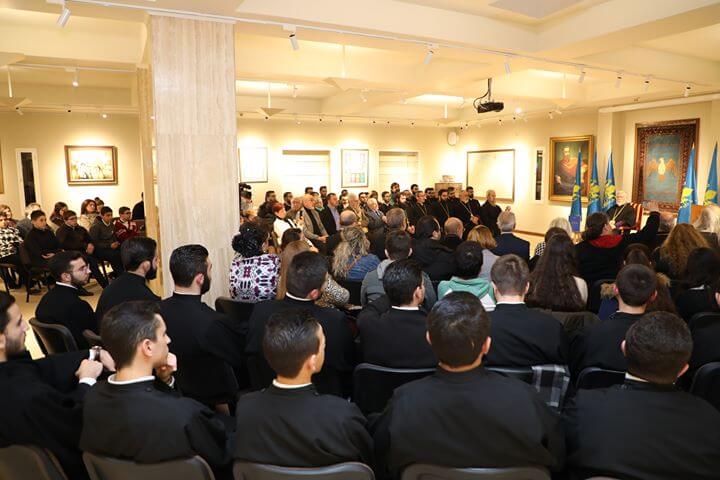 Under the patronage of His Holiness Aram I, the Library of the Catholicosate of Cilicia organized a book launch event of the Armenian composer and conductor Parsegh Ganatchian’s musical collection (two volumes), on Thursday evening, at the Cilicia Museum.

The opening speech was delivered by Ms. Shoghig Yepremian, member of the “Shnorhali” Choir of the Catholicosate. She stated that the book launch is an opportunity to honor Parsegh Ganatchian.

Dr. Antranig Dakessian, Director of the Armenian Diaspora Research Center at Haigazian University, was one of the speakers of the event and presented the biography of Parsegh Ganatchian, focusing on how Ganatchian has built his musical career despite having lived the atrocities of the Armenian Genocide.

The second speaker was H.E. Bishop Meghrig Parikian, who presented the musical career and analyzed the psychology, philosophy and value of P. Ganatchian’s compositions.

The Director of the Library, H.E. Archbishop Shahan Sarkissian delivered an appreciation speech and thanked His Holiness Aram I, the editors of the volumes the musicologists Bedros Alahaidoyan and Dr. Dzovig Meguerian Markarian, and the sponsors. He also announced that in 2020 the publication will launch in Armenia.

The evening was concluded by His Holiness Aram I’s Pontifical address. He began his speech saying that “If these walls had the ability to talk, they would sing the songs composed by Parsegh Ganatchian.” Aram I stated that sometimes students outstand their teachers and such is the case with Parsegh Ganatchian. Concluding, he commended Archbishop Shahan for the initiation of the work, and noted that the Armenian Church in general and the Catholicosate of Cilicia in particular have always contributed to the preservation and development of Armenian culture.

The evening included songs by Ganatchian perfomed by “Armash” choir of the Armenian Theological Seminary, and Shoghig Torosian, accompanied by Hasmig  Kasbarian on the piano.