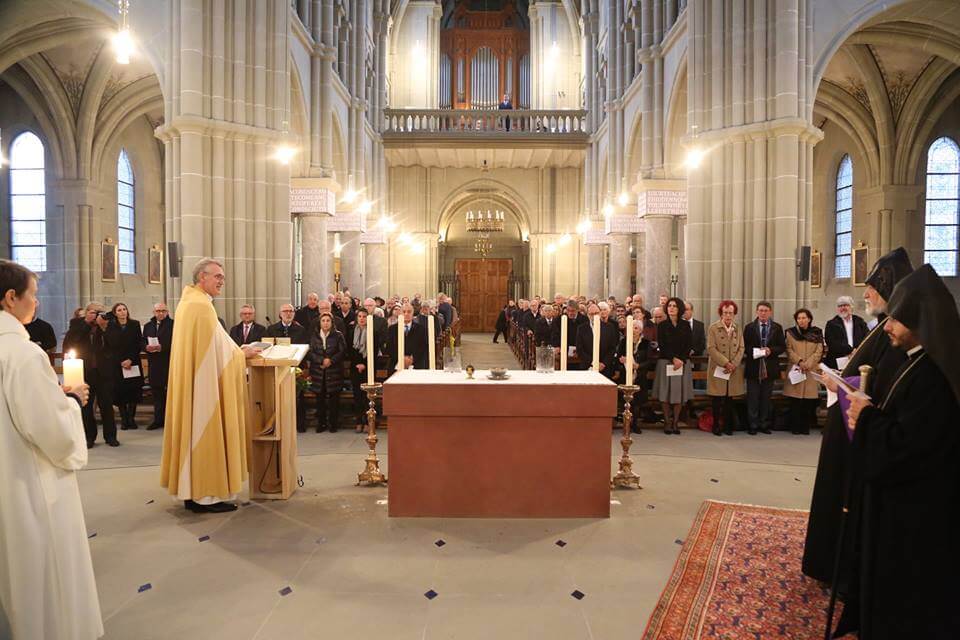 On Saturday 27 October 2018, on the occasion of his official visit to the Old Catholic Church in Bern, Catholicos Aram I shared his views on the current challenges to the Ecumenical Movement.

The lecture followed the evening vespers, at which Reverend Bedros Manuelian and Friar Hovaguim Panjarjian participated.

Before addressing the current challenges to the ecumenical movement, His Holiness briefly reviewed the theological and geopolitical circumstances that divided the churches historically. He told the audience that despite these divisions, individual churches had remained committed to Christian life and their mission, but that later efforts to restore unity, such as between the Greek, Armenian, and Latin churches, were not successful.

His Holiness then stated that the ecumenical movement of the 20th Century was “the most significant event in the life of the Christian churches” because He said: “On the way towards the Goal of Christian Unity, the ecumenical movement promoted common understanding, mutual acceptance, and solidarity in action, and broke the centuries-old walls of separation between the churches.” The Catholicos added that “presently, through cooperation and dialogue, the churches continue to move towards the goal of Unity.”

He emphasized that the ecumenical vision of unity does not mean uniformity. “This vision of unity,” he stressed, “recognizes the diversity of organizational structures, rituals, and theologies and, at the same time, provides the space for reflection on divisive and difficult issues related to dogma, theology, and social concerns.” He then told the audience that “the journey towards unity is long and difficult and demands commitment and cooperation.”

The Catholicos deplored what he perceives in recent times as a waning of interest in the ecumenical movement and a weakening of regional ecumenical organizations. He emphasized the urgent need for interfaith dialogue and called for the renewal of the “ecumenical” commitment. He stated that it is particularly important today that the churches not be tempted to live in isolation. “Cooperation,” he emphasized, “is indispensable” to face the challenges arising from pluralism and globalization.

After the presentation, Bishop Harald Rein thanked His Holiness Aram I for sharing his concerns, and the two leaders exchanged gifts. The evening concluded with a reception, at which the guests could meet and discuss the issues raised by the Catholicos. Her Excellency Rola Noureddine, the Ambassador of Lebanon and the Honorable Anahit Harutyunyan, the Chargé d’affaires of the Republic of Armenia, were among the personalities attending the event.