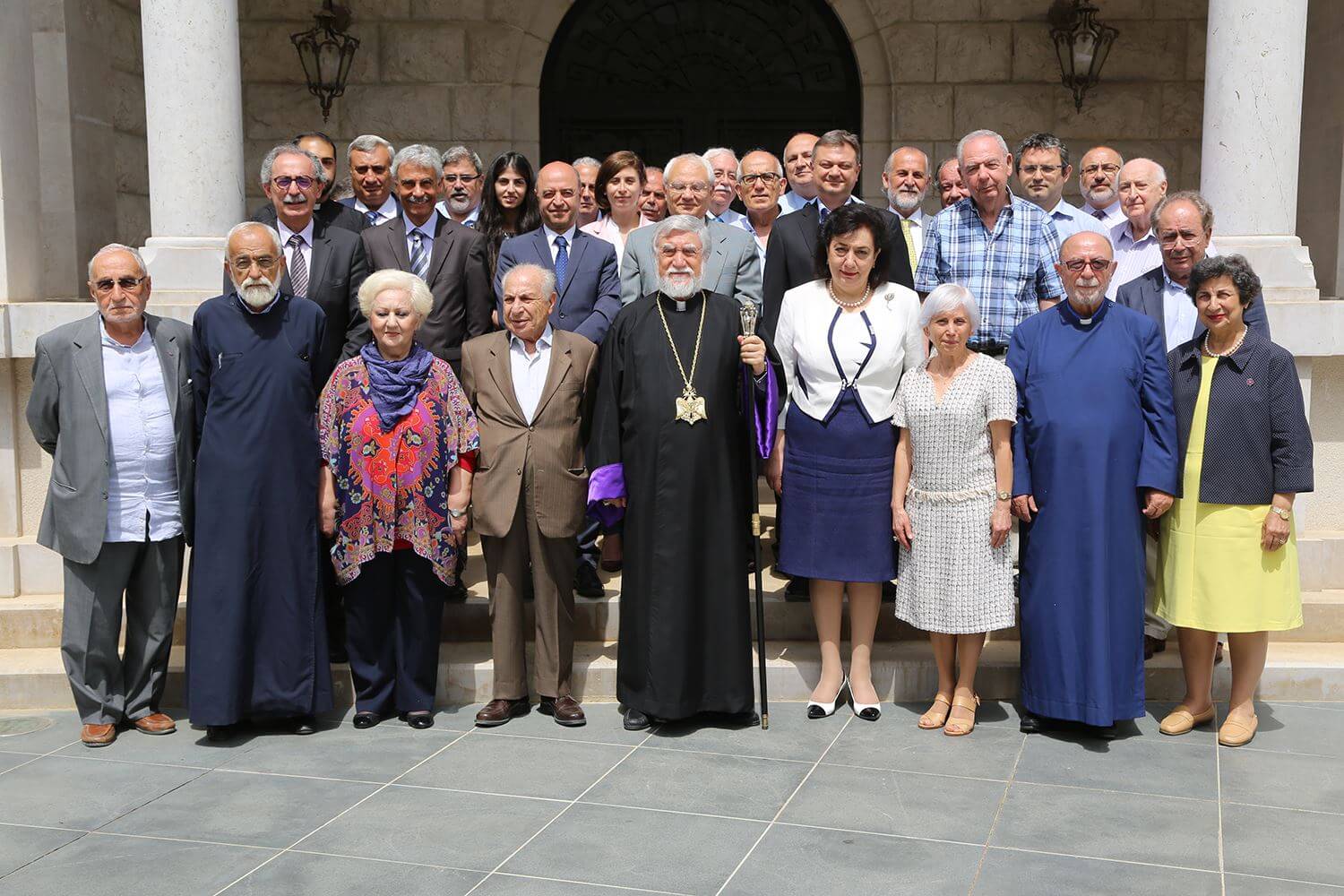 11-13 July 2017. The meeting began on Tuesday with the participation of Mrs Heranoush Hagopian, Minister of Diaspora of the Republic of Armenia, and over 30 scholars from Armenia and the diaspora, representing different disciplines, countries, ages and gender.

His Holiness Aram I opened the meeting with the Lord’s Prayer and invited the diaspora historian, Mr Yervant Pamboukian, to address the participants. Mr Pamboukian spoke of the changing face of the diaspora. He noted that the first generation had focused on constructing churches, schools, and community organizations in order to guarantee the survival of Armenian identity. He then contrasted it with today’s reality, one hundred years later, in which the fourth generation of the diaspora are concentrating on the national demand for justice.

Mrs Hagopian highlighted the importance of Armenian self-understanding whenever addressing the question of Armenian identity. She said that the Armenian diaspora, which had been created in the midst of loss and sorrow, must face two arising questions. First, Armenian identity has become more complex because of mixed marriages; second, Armenians who were forcefully Islamized by the Ottomans are seeking their Armenian roots. Addressing the issue of the Armenian language, Mrs Hagopian expressed her hope that the new generation would consider Armenia and Artzsakh as their home and not simply as a part of their history.

His Holiness Aram I delivered the keynote address, in which he shared his concerns regarding the changing self-understanding of being Armenian in the diaspora today. The Catholicos then urged the participants to think of new indicators; he also asked them to listen to the needs of the youth so that they might shape a new responsive self-understanding and thereby become fully active members of the community. He went on to introduce the programme of the consultative meeting, explaining that the presentation of the proposed topics by a panel of experts would be followed by a plenary discussion. The purpose of the meeting, he explained, was to develop suggestions and directions for further follow-up.

Three round tables were held to discuss the first three topics. Professors Ashod Melkonian from (Armenia), Seta Dadoyan (USA) and Mr Nazaret Berberian (Greece) discussed Armenian identity within the framework of historical developments in Armenia, Cilicia and the Diaspora.

In the next panel, entitled “Identity indicators such as language, religion, culture, family and ideology,” Mr Mihran Kurdoghlian (Greece) addressed the issue of language, Rev Varoujan Hergelian (Lebanon), religion, Mr Khatchik Dedeyan (Lebanon), culture, and Mrs Seta Khedeshian (Lebanon), family. Dr Khatchik Der Ghougassian (Argentina), who prepared a paper on education for awareness building, could not attend; his paper was was read in his absence.

The third and final panel of the day, comprising Dr Paul Haydostian (Lebanon), Dr. Haig Oshagan (USA) and Mr Hagop Balian (France), discussed identity markers in light of globalization and the response of the young generation.

His Holiness Aram I closed the first day by thanking the speakers for their input. He said that the rich discussions had demonstrated the complexity of the issue. Because of the diversity of the Armenian diaspora and the lack of demographic data, the Catholicos proposed that the consultation be considered as a work in progress.