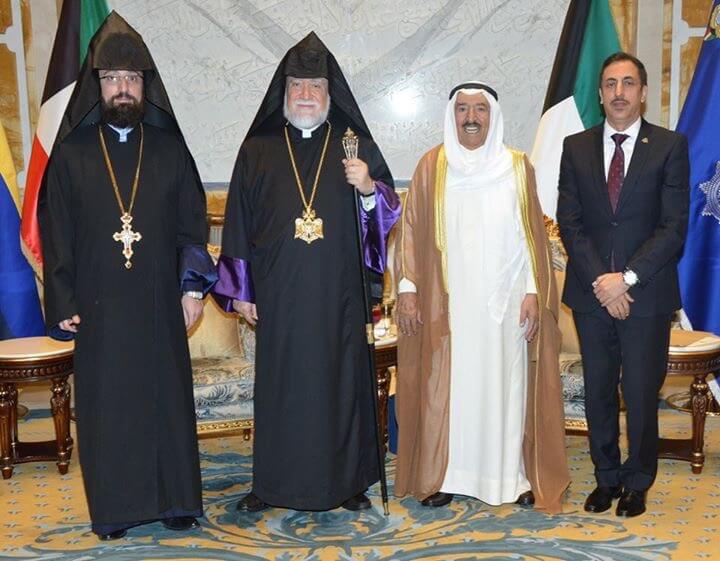 On Tuesday 17 May 2017 in the morning, His Holiness Aram I met with the Emir at the Royal Palace. He was accompanied by Very Reverend Massis Choboyan, Prelate of Kuwait and the neighbouring countries, and HE Maher Kheir, Ambassador of Lebanon in Kuwait.

After the official welcome, His Holiness thanked the Emir for being attentive to the Armenian Community in Kuwait. The Catholicos expressed his joy that the community has been able to finish the construction of its Church and Prelacy, despite financial difficulties. He said, “Facilitating the construction of Churches in our region nowadays indicates the level of tolerance of Kuwait towards its resident Christians.” He spoke of the growing political and economic relations between Kuwait and Lebanon and emphasized the importance of Kuwaiti citizens spending their holidays in the mountains of Lebanon.

Expressing his brotherly love, the Emir recalled the visit of His Holiness Aram I to Kuwait six years ago and praised his outstanding contribution to interfaith dialogue. His Excellency also praised the Armenian community for its loyalty to the country. Speaking of Lebanon, the Emir expressed his hope that the situation in the country would continue to improve. Finally, he promised His Holiness that he would make a donation towards the cost of the construction of both the Church and the Prelacy.

At the end of the visit, the Very Reverend Massis thanked the Emir on behalf of the Armenian Community, and Ambassador Maher Kheir expressed his appreciation for the growing relationship between the two countries.