His Holiness Aram I begins his official visit to Tehran 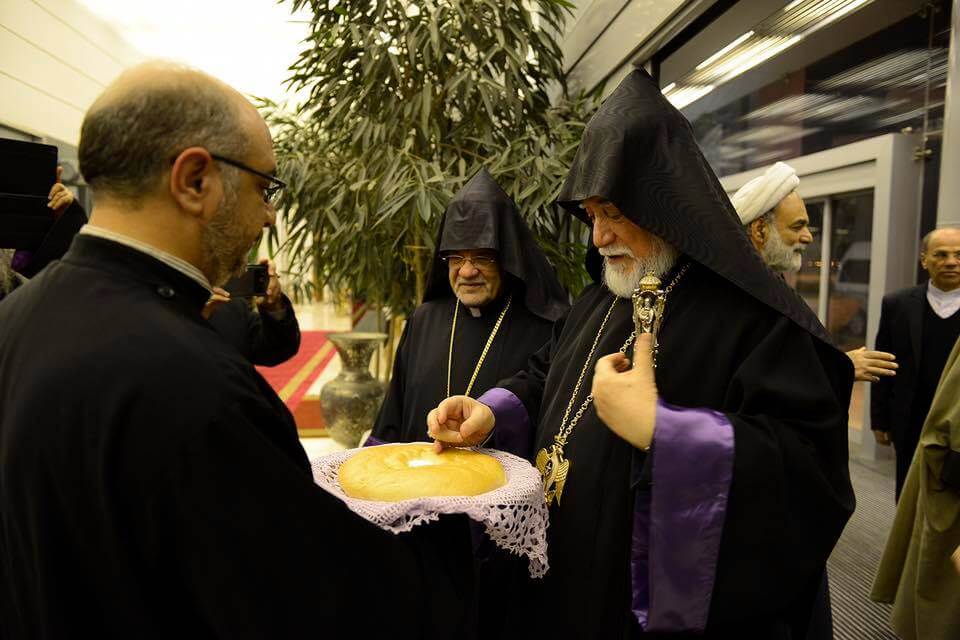 On 13 December 2016, in the morning, His Holiness Aram I and his delegation arrived at Tehran Airport.  He was welcomed by the International Center for Interreligious Dialogue of Iran, as well as Archbishop Sebouh Sarkissian, Prelate of the Diocese of Tehran, Bishop Krikor Chiftjian, Diocese of Aderbadagan, Very Rev. Sipan Kechejian, Pontifical Vicar, Diocese of Isfahan, the Armenian members of the Iranian Parliament, George Abrahamian, representing Isfahan and Southern Iran, Vartan Vartanian, member of the Executive Council of the Catholicosate of Cilicia, and other community leaders.

The delegation from Lebanon included, Rev Bedros Manuellian, Director of Communications of the Catholicosate of Cilicia, Dr. Nora Bayrakdarian, Professor of International Law, Lebanese University, and Mr. Jirayr Reissian, representative of the Armenian Community in the Syrian Parliament.

In the VIP lounge, His Holiness gave thanks for being able to visit Iran once more and to have the opportunity to meet the Armenian Community. In his statement, he said, “the Armenian Community has a long history in Iran, is well organized and has contributed significantly to its development. Relations between the Catholicosate of Cilicia and Iran have been continuous and are based on mutual respect.” The Catholicos concluded by noting that the Catholiosate has been meeting with the International Center for Interreligious Dialogue of Iran in Tehran and Antelias for the past 15 years.

During the visit, His Holiness Aram I will preside over celebrations marking the 20th Anniversary of his enthronement as Catholicos of Cilicia and take part in Ecumenical and Interreligious gatherings; he will meet with members of the leadership of the Islamic Republic of Iran, the leadership of the Armenian Church Councils, community organizations and the people.