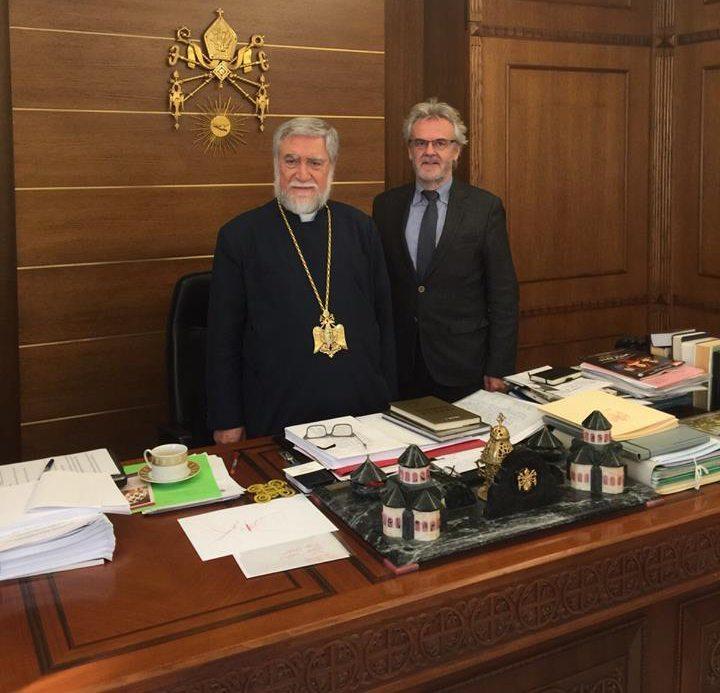 11 December 2015. On Friday morning the head of the Middle East Office of the German newspaper, Allgemeine Zeitung, interviewed His Holiness Aram I in Antelias on the question of the lawsuit and the situation of Armenians in Aleppo.

In response to the question on the lawsuit claiming ownership of its historical Seat in Sis (presently Kozan in Turkey), the Catholicos stated that after 100 years it was necessary to proceed with legal action. The current claim will set a new legal precedent in the pursuit of the Armenian Cause, because the Church will continue demanding all other properties belonging to the Church or the community. After answering other questions, His Holiness Aram I concluded, “if the current Turkish leadership was interested in establishing ‘good neighbourly’ relations with Armenians, it should admit to the 1915 Genocide and return all confiscated property.”

Responding to the question on the situation of Armenians in Aleppo, His Holiness said that despite all difficulties the community is determined to stay and to defend its culture and rights. He then condemned religious fundamentalism, describing it as an evil that had to be opposed by all through a common strategy.

At the end of the interview, the journalist thanked His Holiness and informed him that he was on his way to Istanbul to meet with the Turkish lawyer of the Armenian Catholicosate Legal team.