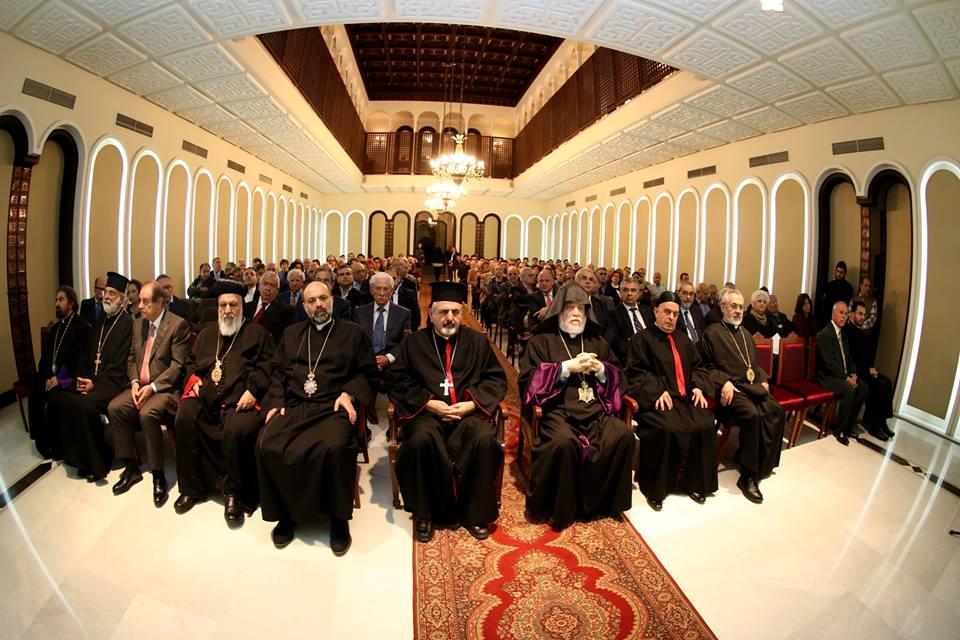 9 November 2015. On Monday evening His Holiness Aram I presided over the presentation of the books in the presence of the Syriac Catholic Patriarch, Ignatius Youssef III Younan, representatives of Churches, government ministers, members of parliaments, ambassadors, representatives of Armenian organizations and over 200 other guests.

Very Reverend Housig Mardirossian read Catholicos Aram I’s opening speech in Arabic, whereby the Catholicos invited the audience to continue demanding justice for the Armenian cause by “Remembering, speaking out and by demanding restitution.” Reverend Housing then introduced the speakers.

Also speaking in Arabic, Professor Nora Bayrakdarian introduced the special issue of the “International Criminal Law Review” on the proceedings of the International conference, “From Recognition to Reparation,” that she helped the Catholicosate organize in 2012. She spoke of the importance of the journal for experts of International Human Rights Law. She explained that His Holiness Aram I reproduced the journal as a book because, as he stated in the forward to the book, “according to the Armenian Christian tradition, human rights are God-given, not human-made. As such, they should be recognized, respected, protected and promoted….What is more, human rights are essential to the vocation of church institutions….. Human rights in general and the Armenian Church in particular are part of the missionary calling of the Armenian Church and occupy, therefore, an important place on its agenda.” In conclusion, Dr Bayrakdarian announced that as a result of the conference, the Catholicosate of Cilicia had filed a lawsuit with Turkey’s Constitutional Court demanding the restitution of its ownership of its historic headquarters in Sis (Kozan).

The second speaker, Dr Saleh Zahreddine, introduced his latest publication in Arabic on “The Armenian Genocide and Witness Stories in Lebanon,” explaining that the book documented the hospitality and friendship of Arabs, highlighted the responsibility of the Ottoman authorities and called upon the current Turkish government to take responsibility for the genocide perpetrated by their ancestors. Dr Zahreddine concluded by expressing his admiration and respect for Turkish intellectuals and academics who, have courageously spoken up for truth and justice.

The last speaker, Dr Seta Dadoyan, introduced the recent publication, “The Armenian Catholicosate of Cilicia: History, Treasures, Mission,” of which she was the editor and co-author. She said that the book, with articles in English and French, covers centuries of history and most importantly the 1915 Genocide and the forceful deportation of the Catholicosate from its historic See in Sis. She then concluded by speaking of the important role of the Catholicosate in the revival of the reorganization and of Armenian diaspora.

The evening concluded with a short concert of Armenian music presented by the Jenderejian brothers (violin), Ms Shoghig Torossian (soprano) and Ms Hasmig Kasbarian (piano). At the end of the celebration, the guests received copies of the books as gift.