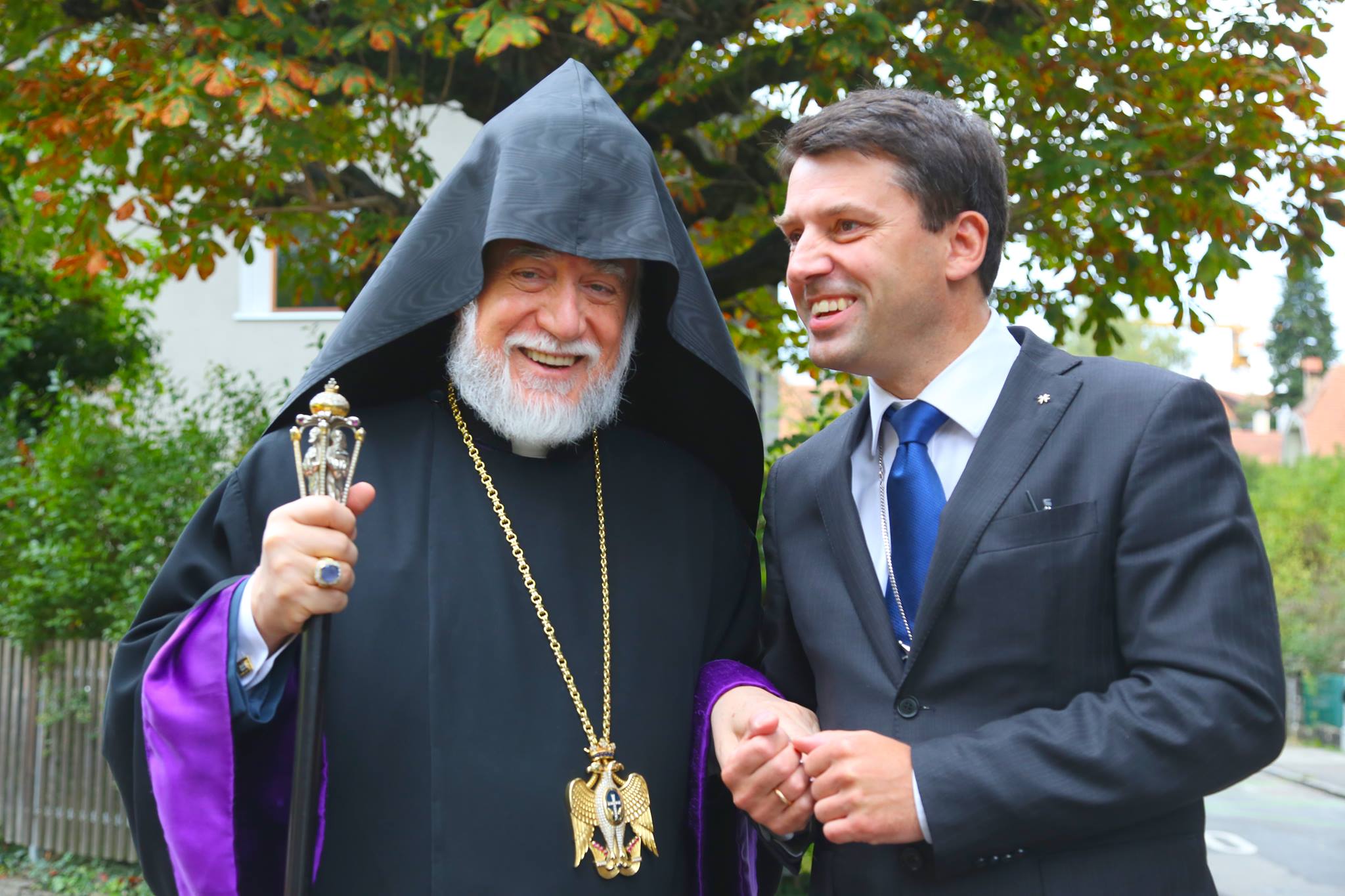 23 September 2015. On Wednesday in the afternoon, His Holiness and his delegation arrived in Berne and went to the headquarters of the Federation of Swiss Protestant Churches. They were met there by the president, Dr Gottfried Locher, and the directors of different departments. Dr Locher welcomed the Catholicos and assured him and the delegation that the cooperation between the Swiss Protestant Churches and the Armenian Catholicosate of Cilicia, which started 100 years ago, would continue strengthened and renewed. He then introduced the programme of the week as prepared in cooperation with the ARMENOFAS Foundation.

His Holiness thanked President Locher, and he emphasised the importance of the visit within the framework of the 100th anniversary commemorations of the Genocide. He remembered the good work of the Swiss volunteers, who helped the victims of the Genocide in Syria, Lebanon and Greece by organizing humanitarian assistance through orphanages, a school for the blind, homes for widows and old people, and hospitals. The Catholicos expressed his gratitude and affirmed the importance of continuing the relationship; he added that he hoped the Swiss authorities would continue their commitment to Armenians and their cause.

After the formal reception, the two leaders had a private meeting, during which they discussed issues related to the cooperation between the two churches.

In the evening, His Holiness Aram I and the delegation went to the residence of the Lebanese Ambassador in Berne where the Chargé d’Affaires, His Excellency, Mansour Chaya, had organized a reception in honour of Catholicos Aram I. Among the guests were ambassadors, politicians, and Armenians and Lebanese living in Switzerland.

Mr Chaya welcomed the Catholicos and expressed the joy he felt at receiving him at his residence. He described the Catholicos as not only a spiritual leader but also an advocate for Lebanon. He then invited His Holiness to address the guests.

Speaking in French, His Holiness expressed how happy he was to be received at the Lebanese Embassy, saying that it felt exactly like being in Lebanon. He then said that he had come to Switzerland to thank the Swiss who had accompanied Armenians through their humanitarian work for the past 100 years, during and after the Genocide, and who advocated their cause at the League of Nations.

His Holiness said how grateful he was to the Lebanese Christians and Muslims who had welcomed the Armenian survivors of the Genocide. Armenians in Lebanon, he said, reorganized their community and institutions and became an integral part of Lebanon. Armenians today form one of the seven major communities; they remain faithful to their adopted country, are conscious of their responsibilities as citizens and are aware of their rights as a community. He added that the Armenian community in Lebanon is the pulse of the diaspora. He noted that many key leaders of the Armenian diaspora had been born and raised in Lebanon and have become ambassadors and spokespersons for Lebanon. His Holiness stated how profoundly important it is for Christians and Muslims to live together, and he stressed that Lebanon is unique in that respect. He then assured the guests that the current problems in Lebanon were those that others have imposed on the Lebanese and expressed the hope that Lebanon would soon have a president.