His Holiness Aram I inaugurates the “Aram Bezikian” Museum, dedicated to the Orphans of the Armenian Genocide” 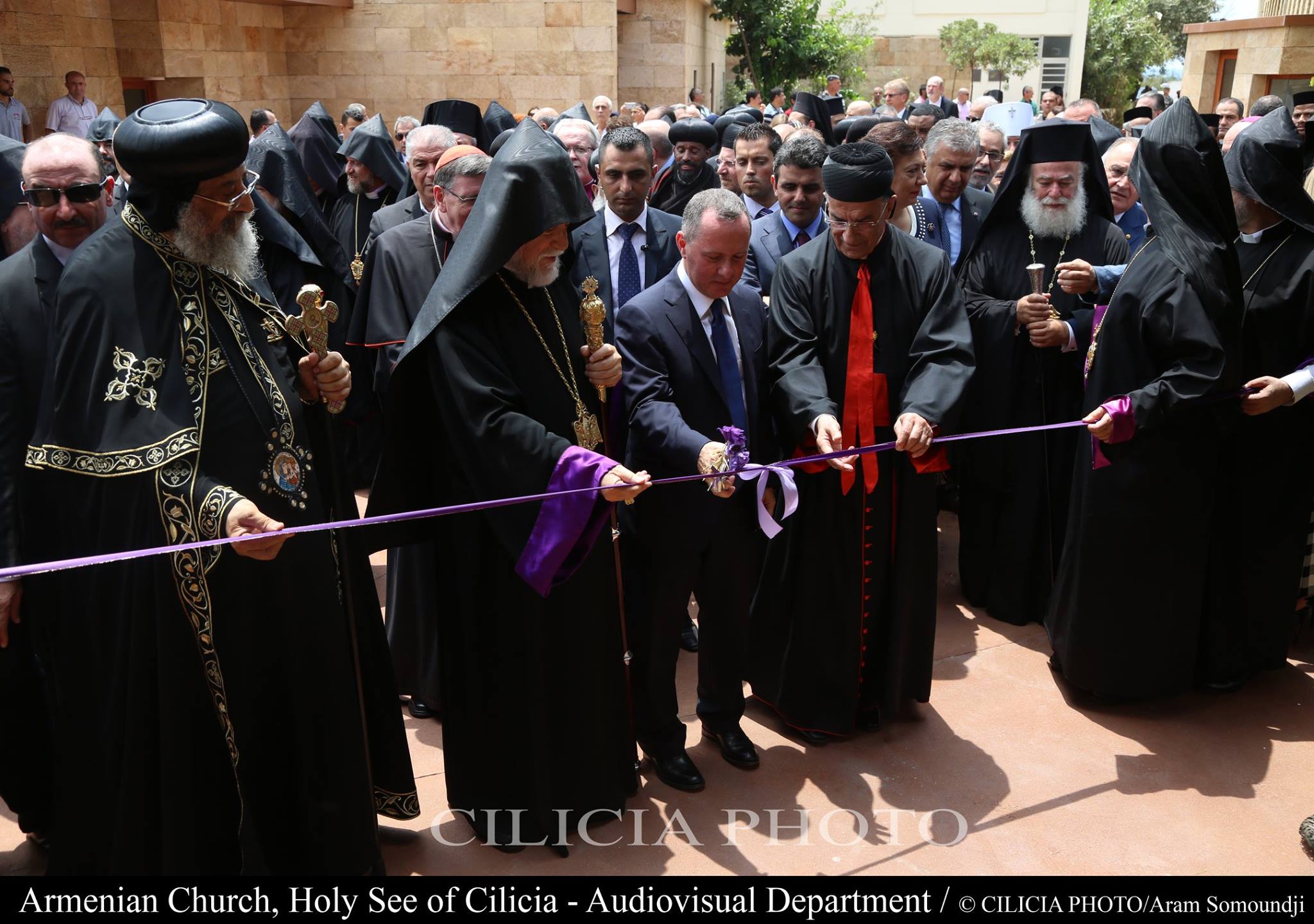 18 July 2015. On Saturday morning, His Holiness Aram I, accompanied by a large number of international and local guests, arrived in Byblos to inaugurate the newly established museum at the Birds Nest Orphanage. The official guests included heads of Churches, ecumenical representatives, prelates of the dioceses of the Catholicosate of Cilicia in Diaspora, Maronite Patriarch Rai of Lebanon, Mrs Hranoush Hagopian, the Diaspora Minister of Armenia, Ziad Hawat, president of the Byblos Municipality and the Bezikian family, sponsors of the museum.

After welcoming the guests, the president of Birds Nest, Mrs Seta Khedeshian, recounted the history of the institution as an orphanage, founded by Danish missionaries, and explained the purpose of the museum. She then invited Alecco Bezikian to address the guests. Mr Bezikian spoke of his father, who was one of the thousands of orphans raised in the Birds Nest. He said that supporting the creation of the museum was his way of thanking all those who had served the institution, paying tribute to his father’s memory and remembering the orphans who had been housed and protected there. Mr Hawat then spoke of the impact of the orphanage on the town and promised to incorporate the museum in the programme of the Office of Tourism.

Speeches continued with messages from Rony Oreiji, Lebanon’s Minister of Culture, read by a representative, and Serge Sarkissian, President of Armenia, read by Mrs Hranoush Hagopian. Patriarch Rai was then invited to address the guests. The Patriarch, who had also served as the Maronite Bishop of Byblos, described the institution as an integral part of the Lebanese community; he also spoke of his cooperation with His Holiness Aram I to safeguard the integrity of Lebanon. He then reminded the audience that Lebanon had also suffered under the Ottomans and said that today’s events in the Middle East were a repetition of that history.

His Holiness Aram I concluded the opening ceremony, first by thanking all those who have served the institution or sponsored it and who have helped create the museum. He then declared that the Aram Bezikian Museum would also become a centre for genocide research. He expressed his hope that the 100th Anniversary commemorative events happening around the world would renew the commitment of Armenians to the legacy of the victims, by demanding justice and the recognition of the Armenian Genocide from Turkey. “The condemnation of the Genocide by the world community,” said the Catholicos, “will call the states of the world to work to guarantee that such atrocities never happen again.” The Catholicos then described the presence of the orphanage in Lebanon as a reminder of the assistance and accompaniment given to the Armenians by the American, Swiss and Danish humanitarian organizations; he concluded: “While in Turkey, our people experienced hatred and massacres, in Lebanon they received love and life from the Arab world and the international community. The Birds Nest is one of the institutions that became the source of the renaissance of our people.”

After thanking the guests who had arrived from abroad, he invited them to visit the museum.