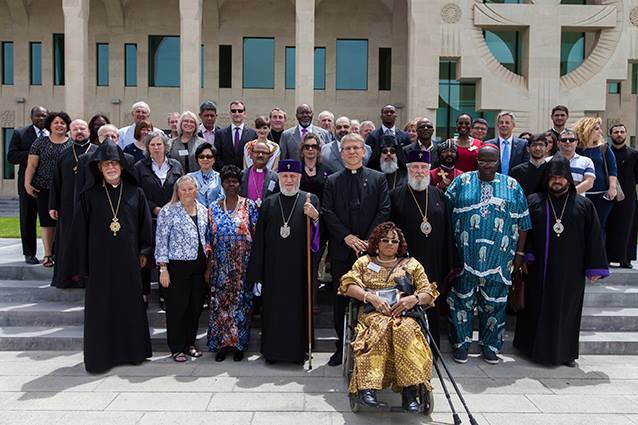 Archbishop Nareg Alemezian, member of the Executive Committee of the WCC, participated in a meeting held in Holy Etchmiadzin, Armenia from the 4th to the 7th of June 2015. Archbishop Vicken Aykazian of Holy Etchmiadzin also represented the Armenian Church.

His Holiness Catholicos Karekin II welcomed the committee and thanked the WCC and its member churches for their support of the just cause of the Armenian people.

During its deliberations, the Executive Committee took note of the 100th Anniversary Commemorations of the Armenian Genocide that have recently taken place in the Vatican, at the Dzidzernagapert in Yerevan and in Washington DC. (USA), all of which were attended by the two Catholicoi, Karekin II and Aram I. Archbishop Nareg then referred to the Genocide commemorations as a chain of events happening in the course of 2015. He mentioned the blessing of the Holy Muron (The Holy Anointing Oil) of the Armenian Church, planned by the Catholicosate of Cilicia, to be held on the 18th and 19th July in Antelias, Lebanon. He informed the Executive Committee that both the WCC and member churches have been officially informed and invited.

The Executive Committee then received the reports of the moderator and the General Secretary and acted upon the proposed recommendations for the continuation of its work. The members of the Executive Committee also adopted a statement on the 100th Anniversary of the Genocide, which was read when they visited Dzidzernagapert martyr’s monument.