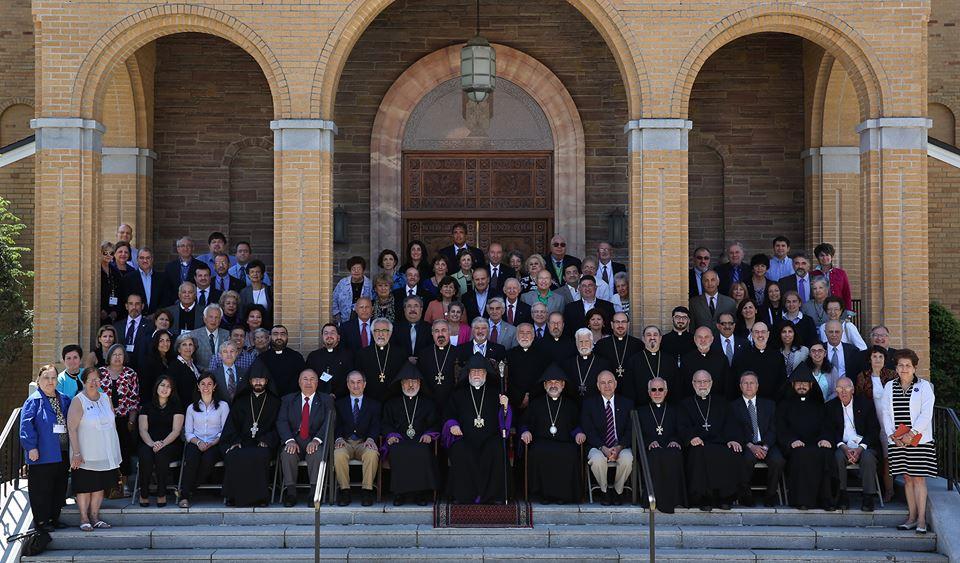 At the end of his pastoral visit to the East coast of the United States of America and before leaving the continent, Catholicos Aram I addressed the Assembly of the Church Council of the Eastern Prelacy meeting at St. Stephan’s Church in Boston.

Archbishop Choloyan thanked the Catholicos for his visit, which, he said, had revitalized the community; he assured the Catholicos that the issues and perspectives he had expressed in his many messages would be studied and either adopted as priorities or translated into guidelines for action.

In his address His Holiness first thanked the Archbishop, Bishop Anoushavan Tanielian, the clergy and the lay leadership of the Eastern Prelacy for their commitment to serving the church and the people with care and utmost responsibly; he then expressed his great satisfaction at meeting the many members of the church and community organizations and the faithful in all the major cities within the jurisdiction of the Eastern Prelacy. Aram I then said that the youth had inspired him with their questions and their concerns. In his conclusion, Aram I asked that the parishes revitalize themselves by reorganizing and adopting new approaches to service; that the Dioceses belonging to the Holy Sees of Etchmiadzin and Cilicia strengthen their cooperation; and that the community assess their religious education and Armenian studies programmes with an eye to making them more responsive to the needs of the new generation.

On this occasion, His Holiness Aram I held also a special meeting with the clergy serving the parishes of the Eastern Prelacy, heard their concerns and gave them his fatherly blessing.