His Holiness Aram I celebrates the Holy Liturgy at St. Gregory Illuminator Cathedral in New York 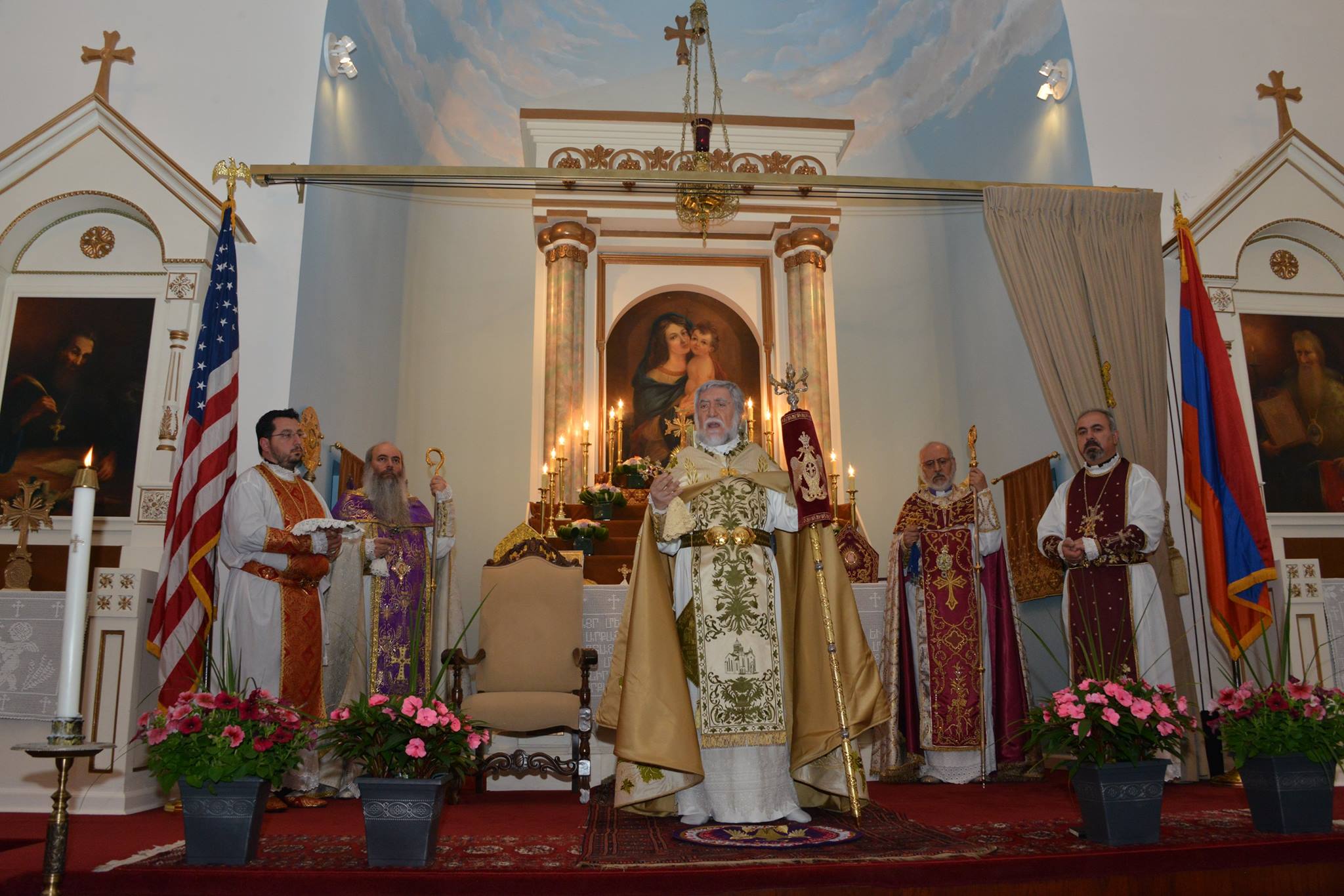 17 May 2015. On Sunday morning His Holiness Aram I celebrated the Holy Liturgy and preached the sermon. Archbishop Oshagan Choloyan, Prelate of the Eastern Prelacy, and Bishop Meghrik Parikian, Prelate of Canada, served the Catholicos on the altar. Mr Zohrab Menatsakanian, the representative of the Republic of Armenia at the United Nations, was also among the faithful.

His Holiness based his sermon on the Biblical verse, Math 16:16, “And Simon Peter answered, you are the Christ, the Son of the living God”. He said: “Christianity is deeply rooted in our history and in our lives. Our Church has been the living expression of our faith. We should therefore continue building our church on the teachings of Jesus, the Son of the living God.” He then added, “Our ancestors miraculously survived the atrocities of the Genocide because of their Christian faith and the Hope, the promise of Salvation in Jesus Christ.” He concluded by inviting Armenians to renew their commitment to the Church of Christ through active presence and participation.

After the Holy Liturgy, His Holiness met the community in the main Hall of the Cathedral and received their greetings. At the conclusion of the ceremony, church choir sang national and spiritual songs, His Holiness Aram I gave his blessings and all sang the “Cilicia” anthem.

His Holiness Recognizes The Benefactors And ‘Servants Of The Church During An Official Dinner.

Following the Holy Liturgy, during a banquet at the New York Palace Hotel, His Holiness Aram I decorated Messrs George Bournutian, Vazken Ghougassian and Hratch Zadoyan with the insignia of St. Mesrob Mashdotz in appreciation for their services to the Church and Armenian culture. Archbishop Oshagan Choloyan presented a letter of recognition to Mr. Viken Minassian, President of the Board of St. Gregory the Illuminator Cathedral and read the 2015 Pontifical Encyclical marking the 100th Anniversary of the Genocide.

Following the dinner, His Holiness Aram I thanked the community and then offered Archbishop Oshagan Choloyan a “Banakeh,” commemorating the 100th anniversary and in recognition of his services to the Church. He explained the unprecedented act of the Catholicosate of Cilicia’s lawsuit filed with the Constitutional Court of Turkey and its implications for the Church and the Nation. The evening concluded with Catholicos Aram I’s blessings and the singing of “Cilicia.”