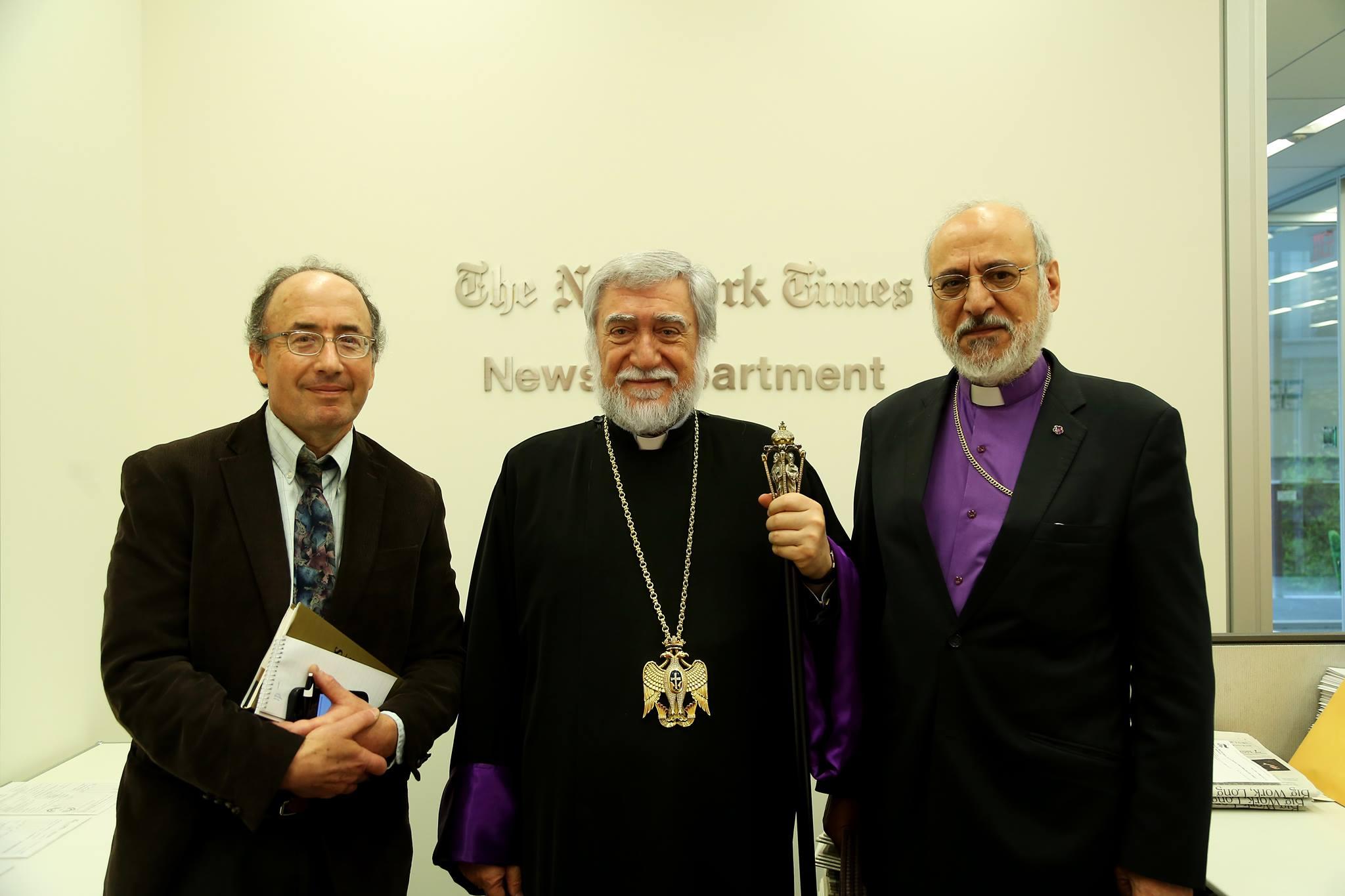 A lawsuit in Turkey filed by the Armenian Church to recover its ancient headquarters, seized a century ago during the Armenian genocide, is the “first legal step” of a goal to reclaim all Armenian property seized by the Turks, a worldwide leader of the church said Monday.

The leader, Aram I, Catholicos of the Holy See of Cilicia, also said that if the Turkish legal authorities rejected the lawsuit, it would “deepen the divide” between Turkey and the 10-million-member Armenian diaspora.

Aram I spoke in an interview at The New York Times while on a visit to diaspora communities in the Northeast after having participated in genocide centennial events in Washington.

He is a leading advocate of the effort to increase global recognition of the 1915-23 killings of 1.5 million Armenians by Ottoman Turks as a genocide, a description embraced by Pope Francis, the European Parliament and legislatures of more than 20 nations but angrily rejected by Turkey’s government, which calls it a distortion of history.

Legislatures of many American states also have called the killings a genocide. The White House has yet to do so, but Aram I said, “I am sure President Obama, in his heart, knows that this was genocide.”

On April 27, lawyers for the church filed a suit with the Constitutional Court of Turkey asserting that the headquarters of the Catholicosate in Sis, part of the Kozan district in southern Turkey’s Adana Province, was wrongly seized and should be returned.

The headquarters, which dates to 1293 and included a cathedral and monastery, was once the epicenter of Armenian Christian life. It was among the tens of thousands of Armenian properties commandeered and plundered during the last days of the Ottoman Empire and the scattering of Armenian survivors. The headquarters was re-established in 1930, in Antelias, Lebanon.

Aram I, who at 68 is the first Lebanese-born leader of the Catholicosate of Cilicia, said he had decided to proceed with a lawsuit after having consulted with 30 legal experts, including some from Turkey. While the church’s efforts to achieve an international acknowledgment of the genocide were important, “after 100 years, I thought it was high time that we put the emphasis on reparation,” he said.

“This is the headquarters of the church,” he said. “This is the first legal step. That will be followed by our claim to return all the churches, the monasteries, the church-related properties and, finally, the individual properties. We should move step by step.”

There has been, as yet, no response by the Constitutional Court to the suit, and the Armenian Church leader speculated that its judges may be ignoring it. But the mayor of Kozan, Musa Ozturk, signaled within days of the suit that the church would have a fight on its hands.

“Not even an iota of land is to be handed over to anyone,” Mr. Ozturk said in remarks quoted by Turkish news media. The mayor said the church had no proof of ownership.

Aram I acknowledged that the church did not have deeds, but said he considered that level of proof to be absurd considering the obvious nature of the properties. “The ownership is clear,” he said. “They are Armenian. Nobody can question the ownership or identity or history of those properties.”

The church’s lead international lawyer in the suit, Payam Akhavan, a McGill University professor and legal expert on genocide issues, said in a recent telephone interview that he planned to take the case to the European Court of Human Rights if the Turkish court rejects it. Under the European convention on human rights, all domestic remedies must be exhausted before such a case could be heard.

Mr. Akhavan said the lawsuit had been carefully framed to avoid antagonizing the Turkish authorities over the genocide issue. “We have a property claim,” he said. “We’re not asking for recognition of the Armenian genocide. We have a very pragmatic claim.”

Aram I said he had never been able to visit the ancient headquarters and feared that the local authorities had made efforts to erase its Armenian identity. He also expressed impatience with a view that the church’s confrontational stance, as seen in the lawsuit, is inconsistent with the principle of forgiveness, a basic Christian value.

“Forgiveness comes when there is confession, repentance, acceptance of sin,” he said. “Reconciliation is part of our human faith and values, but first of all, Turkey must reconcile with its own past.”