Do Not Be Afraid, God Is with Us through the Birth of His Only Begotten Son in Bethlehema 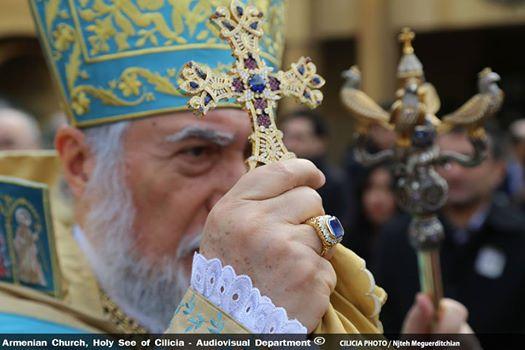 6 January 2015. On Tuesday on all continents Armenians celebrated Christmas and His Holiness Aram I celebrated the Hoaly Liturgy at St. Gregory the Illuminator Cathedral in Antelias.

This year again political personalities and officials joined the community for the Christmas liturgy.

His Holiness began his sermon by reminding the people that God had expressed his desire to show humanity the way to faith, love and hope by sending His only begotten Son (John 3:16). Jesus assured the sick, the sinners and the oppressed of God’s love through his teaching, and repeatedly said, “Do not be afraid, just believe” (Mark 5:36). The Evangelists and Apostles also stated, “If God is for us, who can be against us?” (Romans 8:31).

His Holiness then reminded the faithful that irrespective of difficult historical circumstances, the Church has always told the people to listen to the Gospel, to heed God’s promise and to defy hopelessness. He then acknowledged the current economic problems in Armenia, the difficult political situation in Karabagh and the sufferings of Armenians in Syria and encouraged them to remain strong in their faith and firm in their hope because “God was with us.”

The Catholicos described 2015 as a special year with a special meaning. One hundred years ago, he said, “Ottoman Turkey organized the Genocide to annihilate Armenians. Current Turkey is the continuation of the Ottoman Turkish state, which continues to deny the Genocide. Armenians have no enemies, but they have a just cause. Modern Turkey should take responsibility and accept the crimes committed by its predecessors. According to International Law, genocide is a crime against humanity. Turkey, through its negationist policy cannot ignore the Genocide, the crime committed against our people. For 100 years, we remembered, reminded and demanded justice. Today, with renewed faith we say that we shall continue demanding justice.”

His Holiness concluded his sermon by addressing the situation in the Middle East; he said, “Bethlehem is located in Palestine. The roots of Christianity are in the Middle East. Irrespective of all sufferings, Christians are determined to remain in the region. We and our sister Christian communities are suffering in Iraq and Syria but our people will remain in their ancestral homes in the Arab countries. Referring to the situation in Lebanon, he said that he is thankful that Lebanese leaders are determined both to avoid the conflict in the region and to maintain the internal unity of the country, but added that not having an elected President of the Republic works against those goals; he called upon all parties to assume their responsibilities and elect a new president.

At the end, His Holiness Aram I expressed his good wishes to the President of Armenia, H.E. Serge Sarkissian, His Holiness Karekin II Patriarch of All Armenians, the Patriarchs of Jerusalem and Constantinople and all Armenian everywhere.

After the Liturgy, Catholicos Aram I met with the faithful in the Main Hall of his residence received their good wishes and blessed them.