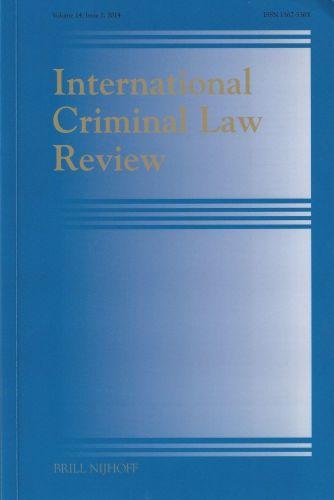 The Communication and Information Office of the Catholicosate of Cilicia announces that the papers delivered at the momentous conference, held from the 23rd through the 25th of February 2012 in Antelias, Lebanon have been published in a special issue in Volume 14 of the International Criminal Law Review, 2014.

The conference, which was the first of its kind to be dedicated to the issue of reparations, was initiated by His Holiness Aram I, assisted by Dr Nora Bayrakdarian. His Holiness, who presided over the conference, wrote the preface to the volume.

The volume is a collection of the articles presented during the conference by internationally known experts, with Henry Theriault as its guest editor.

The following articles appear in the issue:

“The Armenian Genocide: From Recognition to Reparations,” Aram I,

“Economic-Legal Perspectives on the Armenian Genocide,” Dean Susan A. Karamanian,

“The Notion of ‘Continuous Violations,’ Expropriated Armenian Properties, and the

“Restoration of Historical Memory and Dignity for Victims of the Armenian Genocide:

“An Attempt to Recover Armenian Properties in Turkey through the French

Authorities in Syria and Lebanon in the 1920s,” Dr Vahé Tachjian,

“The Spirit of the Law: Following the Traces of Genocide in the Law of Abandoned

“Compensation and Damages in International Law and Their Relevance for the

“International Law between the Duty of Memory and the Right to Oblivion,” Dr Gabriele Della Morte,