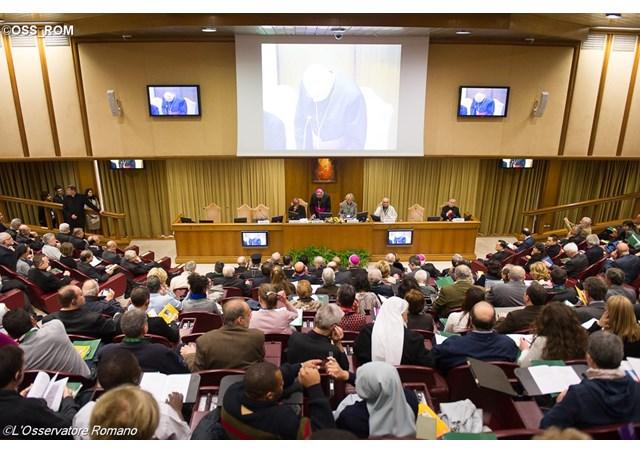 20-21 November 2014, the Pontifical Council for Promoting Christian Unity (PCPCU) of the Roman Catholic Church held an international event at the Pontifical Gregorian University to discuss the impact of the Vatican II Council document on ecumenical dialogue, “Unitatis redintegratio.” His Holiness Aram I nominated Ms. Teny Pirri-Simonian, former Secretary of the Joint Working Group (JWG) between the Roman Catholic Church and the World Council of Churches, to present the Oriental Orthodox perspective.

The event began on the 20th with an audience with Pope Francis I, followed by vespers at the Saint Paul Outside the Walls Papal Cathedral.

The meeting began the next day with a rereading of the document by H.E. Cardinal Kurt Koch, President of PCPCU, followed by Eastern Orthodox and Protestant presentations. The participants then heard three responses by a Catholic, an Oriental Orthodox and a Lutheran. Teny Pirri-Simonian emphasized the role of bilateral dialogues and to move towards their reception by building on the consensus achieved by these dialogues. She concluded her response by quoting from the speech of His Holiness Aram I, as Moderator of the WCC during the 40th anniversary celebrations of the JWG in 2005, where he had said, “We should never question the essential oneness of the ecumenical movement.”