Communiqué of the Armenian Bishops Conference 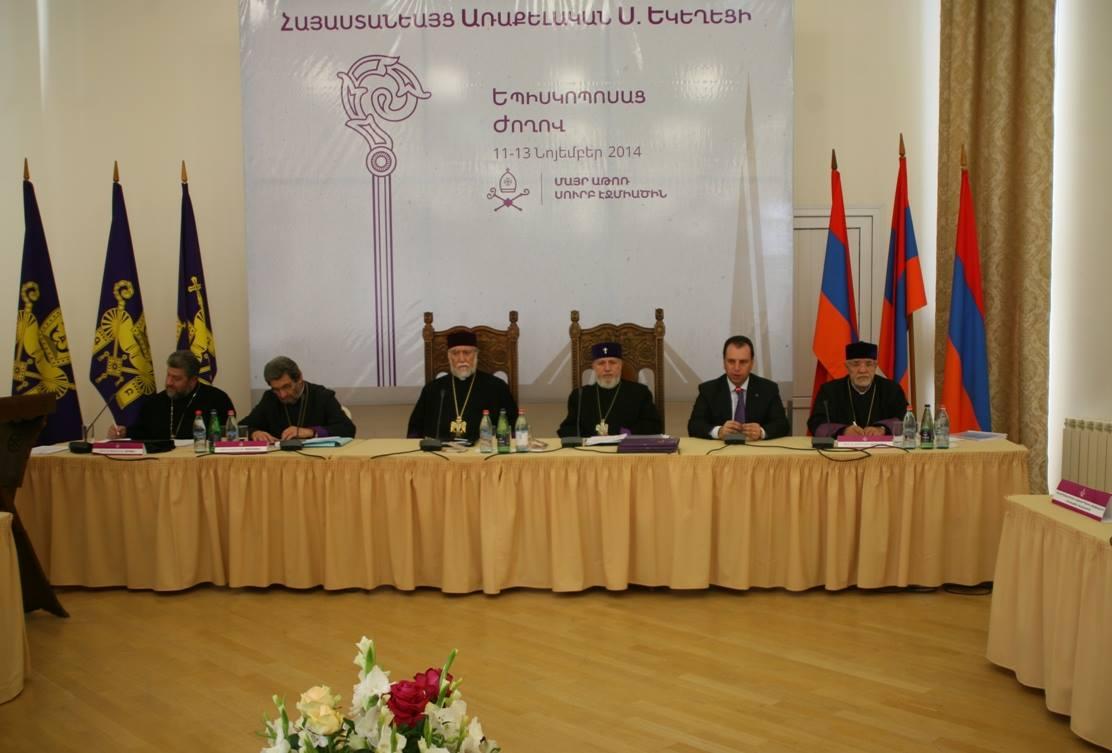 The Annual Conference of the Armenian Bishops was held under the leadership of Holinesses Karekin II and Aram I at the Holy Etchmiadzin with the participation of 61 Bishops from Armenia and Diaspora.

On 11 November the conference began with vespers at the Cathedral and continued with the Lord’s Prayer at the meeting Hall. After the messages of Catholios Karekin II and Aram I, the Bishops elected their officers: Archbishops Yeznik Bedrossian Sebouh Sarkissian, Co-Presidents, and Bishops Vazken Mirkhanian and Papken Charian, Co-Secretaries.

During the opening acts the Bishops congratulated His Holiness Karekin II on the 15th anniversary of his consecration as Catholicos of the Holy See of Etchmiadzin, and they prayed for the memory of the departed clergy.

The main agenda of the three-day conference was to adopt a process for classifying and canonizing the victims of the 1915 Armenian Genocide. After Archbishop Moushegh Mardirossian and Bishop Papken Charian presented the report on behalf of the sub-committee, the Conference approved the order of service and the rites, and they decided to hold the canonization ceremony on 23 April 2015 in Holy Ethmiadzin.

The Bishops decided to add 24 April to the Church Calendar as the day of commemoration. They adopted the testimonies of the victims and the canons and hymns to be included in the service and discussed the canons related to the canonization of Komitas Vartabed and other individuals.

The Bishops received and studied the reports on the rites of Baptism and Chrismation, adopted the guidelines and proposed a process of communicating and teaching them. The purpose of the study report was to harmonize the rite and its practice across all Armenian Churches.

The Conference also discussed current issues and challenges the Armenian Church and its people are facing.

On 13 November, the last day of the conference, the bishops heard a presentation by Mr. Viken Sarkissian, coordinator of the 100th anniversary commemoration programme of the Government of Armenia.

The conference closed with the remarks and blessings of the two Catholicoi, Karekin II and Aram I.

The next Conference of the Armenian Bishops will be held in 2016.